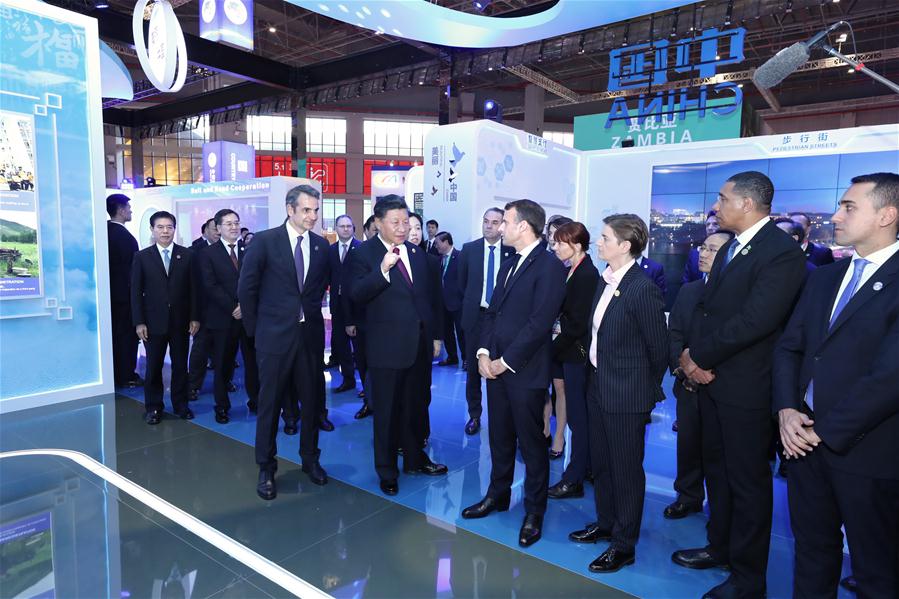 Chinese President Xi Jinping, together with foreign leaders who are attending the second China International Import Expo (CIIE), tour the exhibitions after an opening ceremony of the CIIE in Shanghai, east China, Nov. 5, 2019. (Photo: Xinhua)

At around 9:30 a.m. Tuesday, Xi led foreign leaders into the conference hall where the opening ceremony of the second CIIE was set, as the audience greeted them with thundering applause.

The scene of Xi and foreign leaders attending multilateral events in China would be quite familiar to close observers of China.

In 2019 alone, Xi has hosted the second Belt and Road Forum for International Cooperation, the International Horticultural Exhibition 2019 Beijing and the Conference on Dialogue of Asian Civilizations. With international events hosted by China emerging as a notable feature of the new era, the country is becoming a hub for joint consultation on global governance and development.

Amid the disturbing threat of unilateralism and protectionism in the world, China initiated the world's first import-themed national-level expo in 2018 and has introduced new opening-up policies.

"At last year's expo, I announced the initiatives China was to take in the five areas of further opening-up," Xi said. "One year on, these initiatives and steps have been by and large put in place."

Now in Shanghai, the second CIIE has attracted participation of 155 countries and regions as well as 26 international organizations, while a great number of politicians, business elites and experts attended the second Hongqiao International Economic Forum held alongside the expo.

"The Chinese people often say, 'The world is a big place, and I want to see just more of it.' What I want to say to you today is that the Chinese market is such a big one that you should all come and see what it has to offer," Xi said in his keynote speech at the opening ceremony, bringing about warm applause from the audience.

"Economic globalization represents the trend of history. Like the world's great rivers, the Yangtze, the Nile, the Amazon and the Danube -- they all surge forward in relentless flow, and nothing can stop their mighty movement," he said.

In the speech, Xi presented a prospect of jointly building an open world economy through cooperation, with innovation and for mutual benefits.

"We need to 'join hands' with each other instead of 'letting go' of each other's hands. We need to 'tear down walls,' not to 'erect walls,'" Xi said. "We need to stand firm against protectionism and unilateralism."

Sharing Xi's view, French President Emmanuel Macron, who attended the opening ceremony, said the success story of China shows that China needs to be open to the rest of the world and vice versa, adding that resorting to unilateralism, protectionism, tariffs or the law of the jungle will not resolve the problems the world is facing.

Foreign leaders at the event agreed that China's further opening up will offer the rest of the world greater development opportunities and they would grasp such opportunities to enhance cooperation, advance the Belt and Road Initiative and embrace a brighter future together with China.

After the opening ceremony, Xi toured the exhibitions with the foreign leaders.

Accompanied by Macron, Xi visited the French booth and tasted French wine and beef. French entrepreneurs said they are bullish about the Chinese market and hope to further expand exports to China.

While visiting the Chinese booth, Macron joyfully got into a simulated cockpit of China's homemade jumbo jet. It reminds people of a similar scene at the first CIIE a year ago, when Laotian and Vietnamese prime ministers had a simulated ride on the Fuxing, China's latest generation of high-speed trains, at the Chinese booth.

From the Fuxing to the jumbo jet, the world has witnessed China's continuous leapfrog development and has benefited a lot from the equal and mutually beneficial cooperation with China.

Standing in front of a countdown screen for winning the country's battle against poverty with the foreign leaders, Xi said China is ready to share its poverty relief experience with other countries and jointly build a community with a shared future for humanity featuring common development and freedom from poverty.

As Xi observed in his Tuesday speech at the opening ceremony, China's development, viewed through the lens of history, is "an integral part of the lofty cause of human progress."

"China will reach out its arms and offer countries in the world more opportunities of market, investment and growth," the Chinese president promised. "Together, we can achieve development for all."