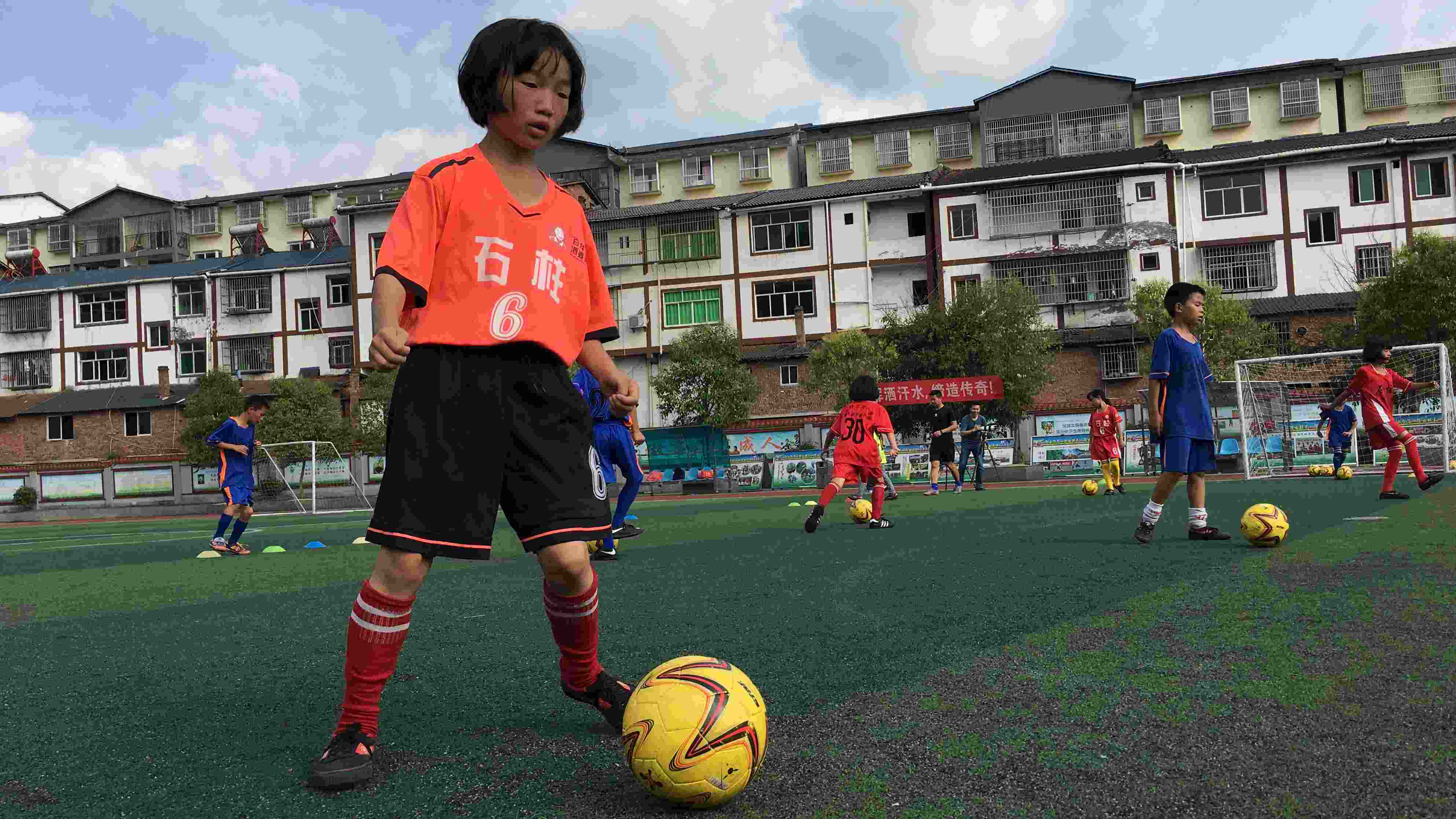 While most girls her age are immersed in all kinds of extracurricular training classes – dancing, painting, piano or English… Ma Huan is running tirelessly on the pitch despite repeated tumbles. For this 10-year-old girl, football is a big part of her life.

“I love football very much. It brings me much happiness and the sport has become a friend of mine,” Ma told CGTN.

The third grader at Sanhe Township Elementary School in southwest China’s Chongqing Municipality practices for at least two hours every day, even when it rains. Back home, chores like cooking await her, especially since her parents have long been focused on their work in urban areas.

In fact, about half the students in this school are so-called “left-behind” children. For them, football is not just about having fun. It’s a chance for them to change their destiny.

Like most rural schools in China, Sanhe Elementary School, situated in the Shizhu Tujia Autonomous County, has lacked sufficient educational resources. In 2013, the principal decided to establish a girls football team to pioneer a road for the remote school’s development.

“I just wanted to bring these children out of the mountains and into a school with better resources via football, where they’ll be more likely to go to universities in the future,” said Sun Xiaoming, principal of the school. He explained that the rural children are normally tough both physically and mentally, which is an advantage in the sport.

Sun’s goal encountered multiple challenges. There was no field at the school, and the students could only train on the concrete playgrounds. What’s more, none of the teachers knew enough about football to coach them.

“We had little football experience or training in the beginning. Then we tried to improve ourselves by learning from the coaches at other schools or through the videos,” said Ma Bailin, one of the coaches who used to be a Chinese language teacher.

Their efforts have paid off.

With support from the local government, the school has constructed several small pitches. Over the past few years, the young footballers have won championships at several city-level and even national-level matches. About 50 students, mostly girls, have also been selected to top-notch Chongqing schools thanks to their football talent.

“Football has also helped them out of loneliness and taught them about the spirit of teamwork,” Sun said.

In 2015, China issued a blueprint for football reform, vowing to expand the number of teenage footballers. Ever since, elementary and middle schools across the country have attached great importance to the education of the popular sport. Sun considers this a good opportunity for the school.

“I hope that some of the children can become professional football players in the future, and that most of them will come back after graduating from college and spread football culture and their skills to the younger generations,” Sun said.

Ma Huan is just one of the children dreaming of one day playing at the international level. It might be early to say whether or not their dreams will come true, but what is certain is that their love of the game is real. It also remains a fact that the gap between the football education in rural schools and urban schools still remains, with many village children having never touched a football.