CHINA 'Made in China' ubiquitous at Tokyo Games

'Made in China' ubiquitous at Tokyo Games 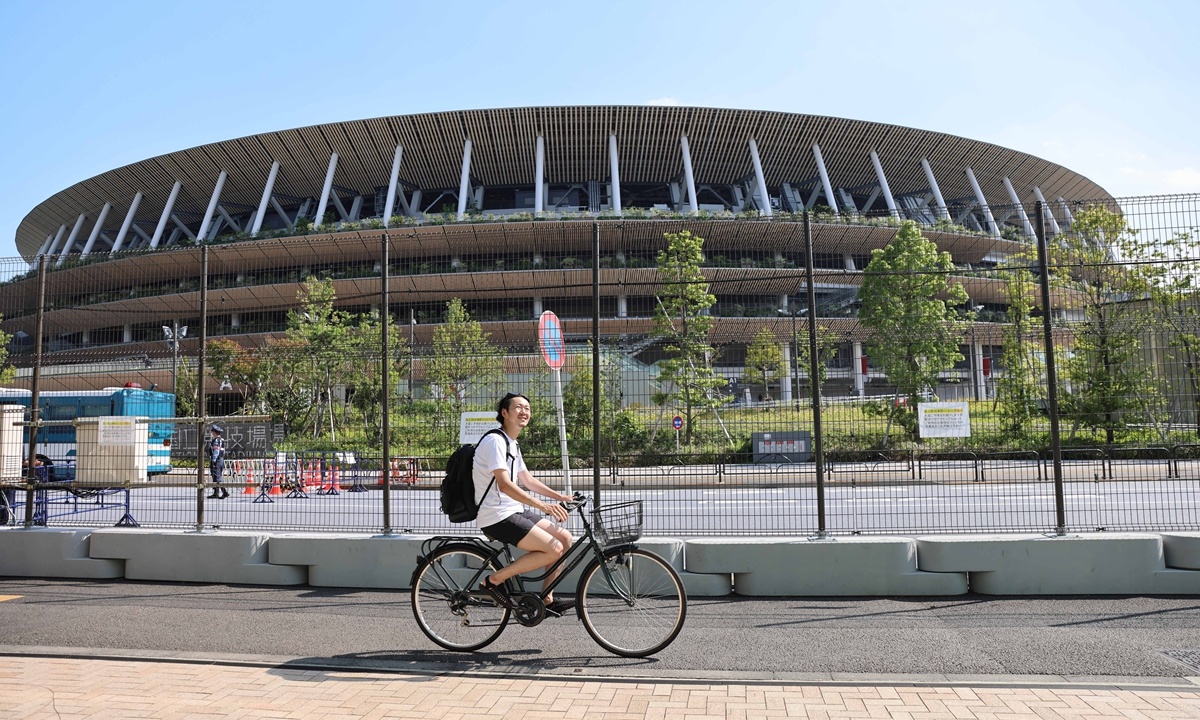 A man rides a bike past a security fence surrounding the National Stadium in Tokyo, Japan on Monday. (Photo: VCG)

The upcoming Tokyo Olympic Games, which is scheduled to open on Friday, is not just a major sports event for athletes but also an important stage for countries to show their strength in various aspects.

At this year's Tokyo Games, China, known as the world's factory, is again showing its manufacturing muscle at a much broader and more advanced level, thanks to technological upgrades at factories and limited disruptions from the COVID-19.

From ordinary products like clothes and shoes, to sports equipment, high-end cutting machines that make Olympic rings and even traditional Japanese mats for judo games, the ubiquity of "Made in China" will be on vivid display at the world's largest sports fair.

The diversification of "Made in China" products also mirrors a trend of Chinese firms moving from being "marginal suppliers" to "major suppliers" of high-tech and core merchandise for the global sports event, industry observers said.

Shaking off the stereotype associated with "Made in China," homegrown brands - with tech innovation at the core of their competitiveness - are increasingly gaining wider recognition in overseas markets.

"Almost all of the 70 five-ring logos mounted on podiums, as well as the podiums' inner metal support frames, were engraved by our machines," Li Lei, marketing director of Bodor Laser, told the Global Times on Tuesday.

One of Bodor's long-term partners, a workshop in Gunma Prefecture of Japan, bought the machine in 2019 and used it to carve the five-ring logo.

According to Li, the technology of its laser-cutting machine is world-leading, and that's why the Chinese company was able to win the order over competitive foreign rivals.

"We have set up a research and development center focusing on self-innovation, and our company's most advanced machine is able to cut a width that is equivalent to one-tenth of a single human hair," Li said, adding that so far, the engraving machine has been exported to more than 180 countries and regions.

In addition to machines mostly out of public sight, more and more of the Games' staff and athletes are expected to wear uniforms made by Chinese textile and sportswear brands this year.

The International Olympic Committee (IOC) announced earlier that it had hired the Hengyuanxiang Group, a Shanghai-based textile company, to make outfits for the opening and closing ceremonies for IOC members and administrators.

A spokesperson of Chinese sportswear maker Peak confirmed to the Global Times on Tuesday that it will supply sports equipment for the basketball teams of Nigeria, Iran and Germany in the Tokyo Olympics. During the Games, the firm will display sneakers that have multiple functions including damping, rebounding, supporting and gripping.

"Technological R&D drives the development of homegrown brands, and we hope through deep participation in the sports event, we could showcase more of our advantages in the international arena," the spokesperson told the Global Times.

The All-Japan Judo League announced in March that the judo mat produced by China-based Shandong Taishan Sports Industry Group had won the bid to supply mats for the event. The judo mats were shipped to Japan by June.

Yang Kai, director and office manager of Taishan Sports, told the Global Times on Tuesday that the firm's rivals during the bidding process included companies from Japan, Germany, France, Spain and Australia.

"Our sports equipment leads the industry standards on a variety of fronts including raw materials, performance, design and safety. We also have participated in making 90 standards in the overseas and domestic sports equipment sectors, and nearly 200 of our products received certificates from 13 international sports organizations, which also leads other peers," Yang said, noting that Taishan is among the large number of "Intelligent Made in China" brands that have expanded overseas.

The Tokyo Olympic Games also marks the sixth consecutive time that domestic table tennis ball producer DHS to be a supplier for table tennis games under a cooperation contract that the Chinese company signed with the International Table Tennis Federation.

According to media reports, DHS has developed a new table tennis ball called DJ40+ specifically for the Tokyo Olympics, with the ball's precision significantly being improved after technological upgrades.

The special ball's production was actually completed by the end of March 2020, despite the disruption of the COVID-19 epidemic in February, which not only halted factory production but also led to a lack of upstream materials.

The Tokyo Olympics were originally scheduled to open in July 2020.

"Our preparations for an international table tennis game typically occur one month ahead. But taking account of the dynamic development of the pandemic, the preparation period was adjusted to two months," the general manger of DHS' marketing department Guan Songya was quoted as saying in media reports.

Industry observers noted that China's stable and complete supply chain, which has been relatively immune to the fallout of the global pandemic, partly fueled the booming demand for "Made in China" products during this year's Olympic fair.

"The level of a country's engagement in major international sports events is also a barometer of its economic and manufacturing strength. In the past, we only supplied cups and served as an OEM for making Olympic souvenirs, but now we have made the historical stride in a transformation to 'Chinese creation,' not only in terms of capacity but also quality," Hu Qimu, chief research fellow at the Sinosteel Economic Research Institute, told the Global Times on Tuesday.