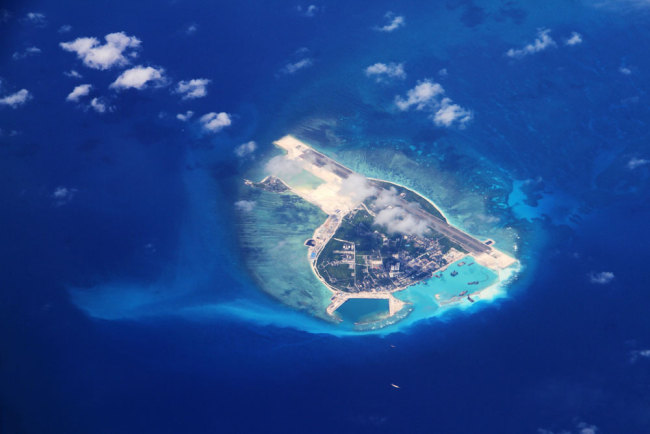 A major power outside the region is trying to turn the South China Sea into an arena for major-power wrestling, which is the source of tensions in the region, said head of Chinese mission to the European Union (EU) Thursday.

In an article published on EUobserver, a European online newspaper, Ambassador Zhang Ming said China would not allow its territorial sovereignty and regional security to be undermined, nor would it allow any major power outside the region to muddy the waters.

The major power outside the region, he said, has kept making unwarranted accusations against China over the so-called "tensions" in the South China Sea recently, despite the continued improvement of the situation.

China was the first country to discover, name and develop the South China Sea islands, Zhang said in the article, giving a brief introduction to the history of the issue.

China's sovereignty over the South China Sea islands had never been challenged before the 20th century, and has been widely recognized by the international community as part of the international order after the end of World War II, he added.

China has been committed to settling the disputes through negotiation with the countries directly concerned, and focusing on practical maritime cooperation, Zhang said. Such efforts have contributed to the overall peace and stability in the South China Sea as well as development and prosperity of countries in this region.

In the article, Zhang pointed out that the major power outside the region has deliberately hyped up the so-called "tensions" in the South China Sea and accused China of "militarizing" the region.

He argued that China has every legitimate right to deploy necessary defence facilities on its own territory.

He also noted that it is fair to say that when it comes to the South China Sea issue, that major power cares about things totally different from those of China and Association of Southeast Asian Nations countries.

Its real agenda is to muddy the waters and seek excuses to justify its military presence in the region, in order to uphold its hegemony in the Asia-Pacific and maritime supremacy the world over, Zhang said.

Littoral states share the commitment to maintaining peace and stability and promoting cooperation in the South China Sea, he said.

"It is our hope that countries outside the region could respect the wishes and choices of countries in the region and play a more constructive role. Any attempt to impose one's own selfish agenda or blindly follow suit from the outside would only pose real risks to peace and stability in the South China Sea," Zhang said.