'Most Beautiful Doctor of China' devoted to health of her people 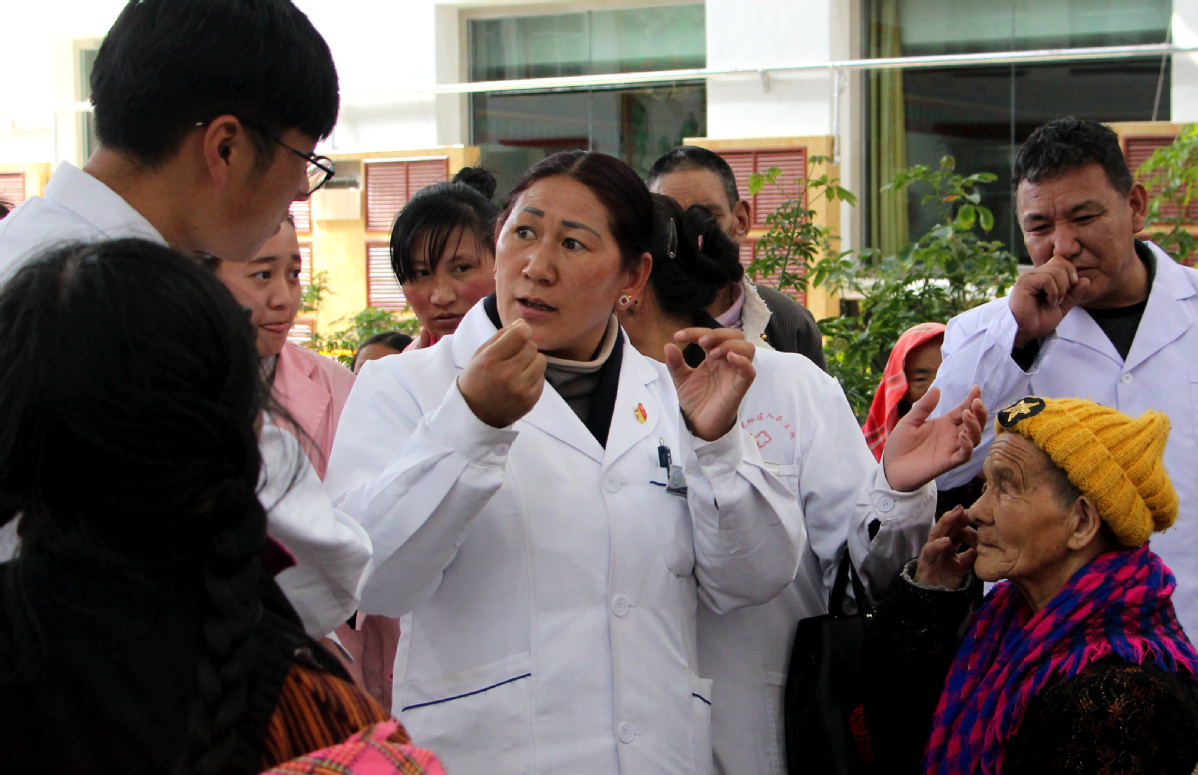 Most Tibetan people regard Losar, or Tibetan New Year, as a time for family reunions, but Tsering Pedron usually spends most of the holiday treating patients at the Ngari People's Hospital in Ngari prefecture, Tibet autonomous region.

"I know it's important to be with family during such major holidays, but if I give my time to my family, how can I face the many patients who need me at any time?" said the 48-year-old director of the obstetrics and gynecology department of the hospital.

She has only spent New Year with her family once over the past 26 years.

Working as a senior doctor and surgeon in the hospital's Ob-Gyn department, Tsering Pedron has saved tens of thousands of lives, and she has encouraged Tibetan mothers to give birth in hospitals.

Like in most places in Tibet, mothers in Ngari tend to traditionally give birth at home and not in hospitals due to dated ideas.

However, the situation has improved since 2010 as many now decide to give birth in hospitals thanks to the full reimbursement of the maternity insurance policy and maternal subsidies at the hospital.

"The township and village government officials have been implementing good policies for healthcare and other areas to rural people, and that was how they were gradually encouraged to go to hospital for delivery," said Tsering Pedron.

This was a great step forward for healthcare in a remote region like Ngari, as the delivery of babies in hospitals reduces the incidence of maternal and newborn deaths. Moreover, by having regular hospital checkups, both the mother and baby are safe during the entire pregnancy process.

"Now, more than 98 percent of people living in rural and urban areas of our prefecture go to the hospital for childbirth instead of giving birth at home, apart from a few people who live in very remote nomadic areas," she said.

Since 2015, her hospital has not had maternal deaths, except for a few infant deaths. Though being a doctor is not easy, Tsering Pedron said she feels proud of herself whenever she hears the first cry of a baby or sees the smile of a mother after a successful delivery, which she finds to be the most fun part of her job.

After graduating from Shandong Medical College, Tsering Pedron studied for one year in the Central Hospital of Jiading District Shanghai, and thereafter nine months in the First Affiliated Hospital of Xi'an Jiaotong University.

In these two hospitals, she learned the knowledge and clinical experience for Ob-Gyn. As she is devoted to the safety and health of her patients, Tsering Pedron has long qualified for retirement, in which she can choose to retire after working 20 to 25 years according to the local retirement law, but she is not thinking of it now.

Instead, she continues to work hard and has received different honors from different levels of governments.

In 2016, she was selected as a deputy of the ninth congress of the China Communist Party of the Tibet autonomous region, and was also selected to be a deputy of the 19th CPC National People's Congress.

In 2018, she was honored with the title "The Most Beautiful Doctor of China", jointly presented by the National Health Commission and China Media Group.

"Gaining such honors are repayment and confidence of what I have been doing for my people, and I am overwhelmed with such great honors," she said.

"I want to work some more, because I can train more young medical talent to better serve patients, and I want to contribute a little more when I can," she said.