'My China Album' to celebrate 40 years of China-US memories 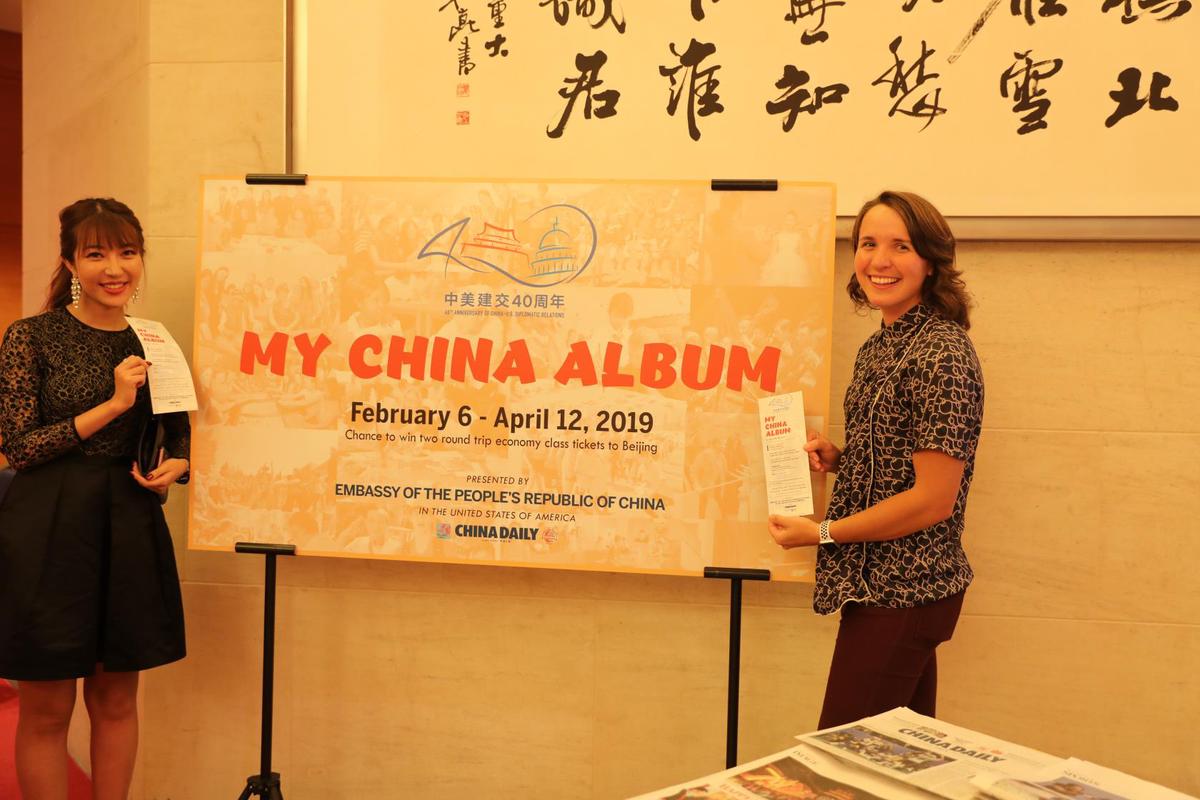 Guests pose for photos at the My China Album sign at the Chinese Embassy in Washington on Wednesday. (Photo: China Daily)

My China Album, a story-sharing event focusing on the friendship between people from China and the United States, was launched on Wednesday at a reception hosted by the Chinese embassy celebrating the 40th anniversary of the establishment of China-US diplomatic relations.

The event, co-organized by China Daily, China's largest English-language newspaper, which has a global audience, encourages Americans to submit photos and stories highlighting their most memorable experiences in China, especially their encounters with Chinese people. The top winner will receive two economy-class, round-trip airline tickets from New York to Beijing.

The exchange of visits between Chinese and American table tennis teams in 1971 and 1972 opened a new chapter in China-US friendly relations and contacts.

On Jan 1, 1979, the two countries officially established diplomatic relations. Since then, people-to-people exchanges have helped cement a foundation and have played a key role in promoting understanding and mutual trust between the two countries.

There are currently more than 5 million mutual visits between the two countries every year,and China and the US have become each other's largest and second-largest sources of international students.

"The year 2019 marks the 40th anniversary of diplomatic relations between China and the United States. Over these decades, there has been a marvelous growth in people-to-people contacts and ties between our two countries. As we now look forward to the coming decades, the friendship between our two peoples will continue to be the very foundation of relations between our two great countries. That's why we invite you, invite all our friends all over the United States to come and share with us your most memorable stories with China. Together we will build stronger ties between our peoples. And with your personal stories, you will help make history," said Cui Tiankai, Chinese ambassador to the US.

"People are the most interesting stories behind a sound bilateral relationship, and pictures are a strong testimony to such relations," said Zhou Shuchun, publisher and editor-in-chief of China Daily. "At China Daily, especially with our newly launched Global Edition, we are committed to bridging the gap of understanding through powerful people stories. I believe when we see your photos and hear the stories which go with them, we will better understand the essence of China-US relations, which is really about people," Zhou said.

The China National Tourist Office in New York and the China General Chamber of Commerce – USA (CGCC) are event partners. More partners in the US are welcome to join the campaign throughout the event.

Participants are invited to submit up to three photos with captions, limited to 300 words or less, explaining their person-to-person exchange, relationship or experience, exemplified through the photographs. Submissions should be made via email at: mychinaalbum@chinadailyusa.com, or via mail at: My China Album, 529 14th Street NW, Suite 1108, Washington DC 20045.

Judging will take place at the close of submissions, and prizes will be awarded to 10 finalists. All entrants will receive a souvenir for participating in the event.

The grand-prize winner will receive the flight tickets. Finalists also may have their stories featured in China Daily through its print edition and many digital platforms.