CHINA 'New Approaches': How China stepped up its COVID-19 treatments

'New Approaches': How China stepped up its COVID-19 treatments

Editor's note: After three years of strenuous fighting to prevent a major COVID-19 outbreak that could have taken tens of thousands of lives, China has been lifting restrictions as the less lethal Omicron opens a way for greater social and economic recovery. But the battle is by no means over. CGTN is publishing a special series, "New Approaches," to reveal how the nation recalibrated to guard the health of the people and the economy. 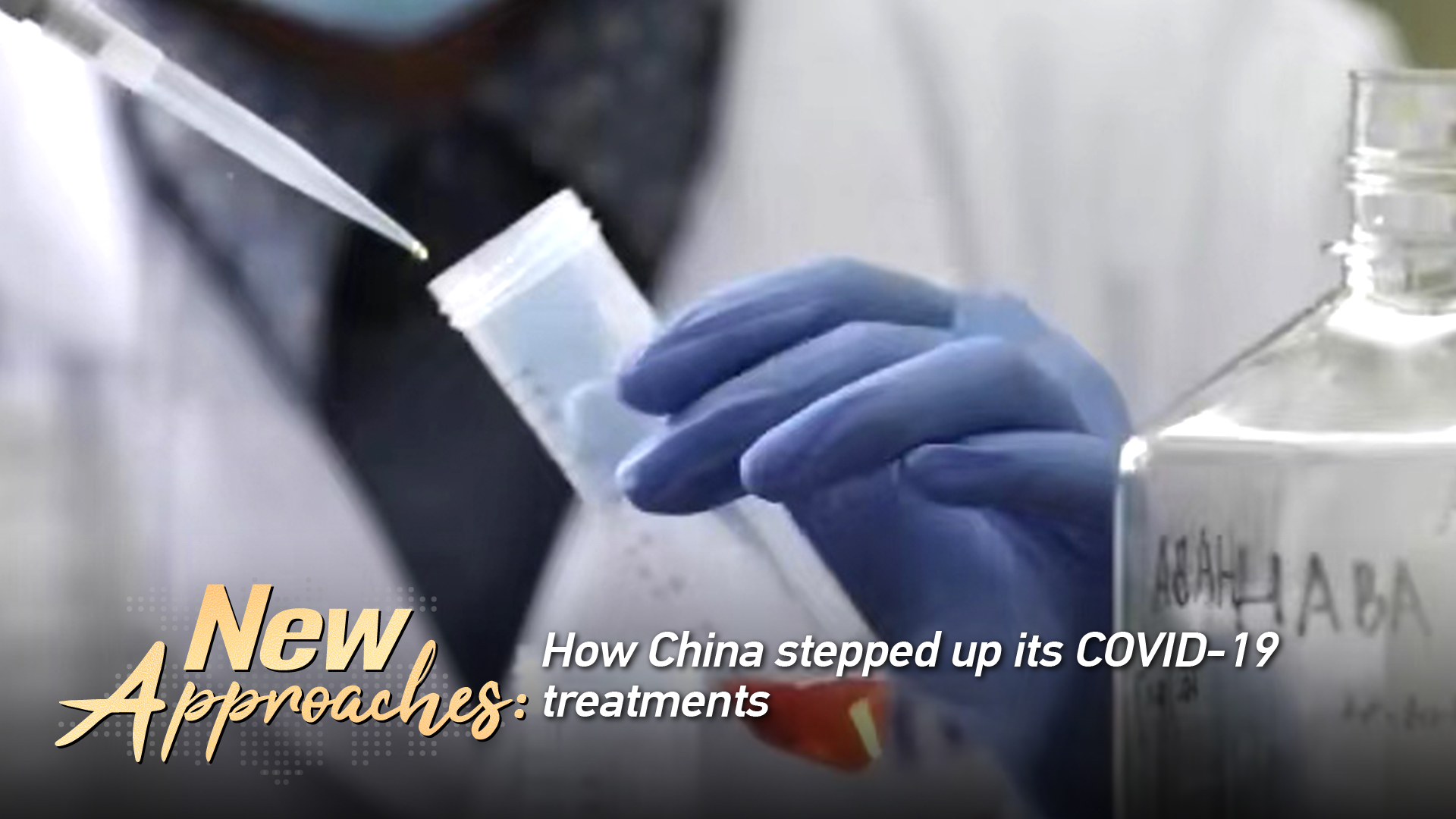 China has been racing against the clock in developing COVID-19 drugs while promoting vaccination – one for saving lives and the other for providing broad protection.

While the stringent COVID-19 containment measures of the past three years helped China evade deadlier variants than Omicron and prevented many deaths, the development of effective COVID-19 treatments also extend protection to people at high risk of exposure or with underlying health conditions.

China has taken initiative in the development of COVID-19 drugs from three main approaches since the beginning of the pandemic. The three strategies are inhibiting the virus' replication machinery, blocking the virus from entering a target cell and regulating human's immune system's overactive response.

China's first COVID-19 antibody drug, a cocktail therapy of two monoclonal antibodies of amubarvimab and romlusevimab, was approved for emergency use by the country's drug regulator on December 8, 2021.

The treatment is applied through intravenous injection and randomized clinical trials across many countries suggest it is 80 percent effective in cutting hospitalizations and deaths among high-risk groups.

The antibodies used in the treatment have also proved to be broadly neutralizing antibodies, able to target different sites of the virus, according to Zhang Linqi, the leading scientist involved in the treatment and also a professor at the School of Medicine at Tsinghua University.

"Antibody drugs and vaccines are complementary to each other, each having its role in disease prevention and treatment," Zhang said in December, 2021, as interviewed by The Paper, a Chinese digital news outlet.

Apart from this cocktail therapy, China has been making progress in developing COVID-19 drugs in the past three years with the most recent one being a nasal-spray based monoclonal antibody drug, F61.

Developed by Sinopharm, the pharmaceutical corporate responsible for producing the country's inactivated COVID-19 vaccines, F61 was approved for clinical trial on November 28. It is also a broad-spectrum neutralizing antibody with highly active response against Omicron variants.

Its nasal-spray allows the drug to directly act on the nasopharyngeal upper respiratory tract, forming a protective membrane on the nasal mucosa, the company said.

Along with the development and production of other COVID-19 drugs, they help to reduce the severity of symptoms and to prevent hospitalization and death in people who become infected with COVID-19.

But on the baseline, getting people vaccinated is the most effective way of impeding the virus from mutating, as said by an expert from Chinese Center for Disease Control and Prevention (CDC).

In an interview with China Media Group in April, 2021, Wang Huaqing, CDC's chief scientist for the Immunization Plan, said that China needs at least 1 billion people being inoculated in order to build immunity protection.

By December 7, 2022, about 3.45 billion vaccine jabs had been administered and more than 228 million people above 60 had been fully inoculated as of November 28, accounting for over 86 percent of the total population in that age group, according to the National Health Commission.

That is, over 90 percent of people in China have received their full inoculation of COVID-19 vaccines – including a booster injection.

China is now rolling out campaign for second booster shots, particularly among the elderly people.

With continuous breakthrough in its vaccine development, China now has COVID-19 vaccines that can be given to people in ways of injection, inhaled and nasal spray.

It is also accelerating the development of its messenger RNA based vaccines, one of which has been approved for emergency use in Indonesia in September.