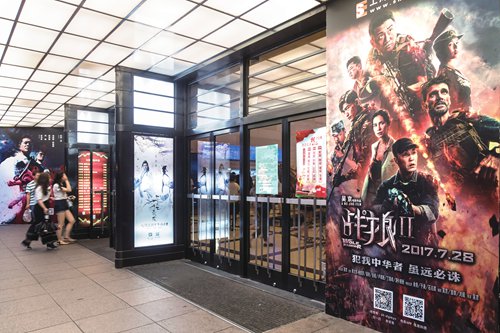 Mainstream films in Chinese cinemas will be given priority with the creation of a "People's Cinema Line," which experts said could alter China's celebrity-focused movie industry and better convey core socialist values. China's media regulator will choose 5,000 movie halls in the country to form a "People's Cinema Line," which will be used to screen mainstream-themed movies, news website thepaper.cn reported on Monday, citing a document from the State Administration of Press, Publication, Radio, Film, and Television (SAPPRFT). It will show mainstream movies during special events. It will be asked to offer favorable policies to attract the public, such as group sales, discounts and bonuses. "The 'People's Cinema Line' is part of the country's efforts to promote domestic mainstream films, which have been marginalized by Hollywood productions and celebrity-led films in extremely commercialized cinemas," Zhang Peng, a film researcher at the National Research Center of Cultural Industries of Nanjing University, told the Global Times on Tuesday. More support to mainstream films will reshape the chaotic ecology of China's movie industry, a field that overemphasizes celebrity-led scripts and high marketing budgets, Zhang said. "As an open artistic form, mainstream movies play a key role in leading social thought," said Su Wei, a professor at the Communist Party of China Chongqing Committee's Party School.Mainstream films, which normally portray the nation, reform and history, are meant to educate people to spiritually think about the country, Su told the Global Times. The demand among the Chinese to watch mainstream films that promote China's core socialist values with Chinese characteristics, such as patriotism, freedom and equality, is high, he said.The 5,000 movie halls under the "People's Cinema Line" will be selected from China's 50,000 cinemas. Cinemas which are influential, affiliated with cinema management companies and have no violation records will be give priority. The seating capacity in the chosen halls should not be lower than 100, according to the  SAPPRFT statement. The number of movie halls in each province and city will be proportionately chosen. Guangdong Province will have the most film halls at 594, Jiangsu Province, 437, and the Tibet Autonomous Region will have the least at 5. With strong screenplays and national-level support, mainstream films are capable of becoming box office hits, Zhang added. In 2017, domestic-made films raked in 30 billion yuan ($4.7 billion), according to the SAPPRFT. As of November China's 2017 box office exceeded 50 billion yuan, the first time the country has broken the 50-billion-yuan mark. During this year's Spring Festival, five major domestically-produced films, such as the patriotic-themed Operation Red Sea, are expected to be screened.