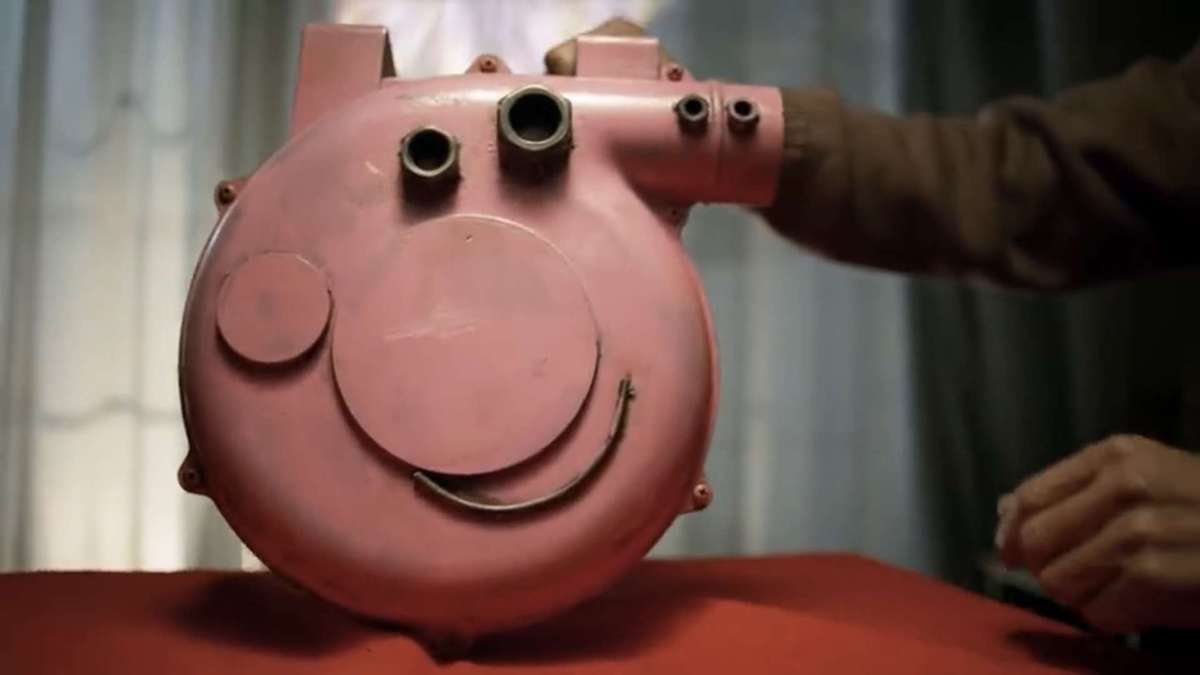 A model of Peppa Pig was part of the video What Is Peppa?, a teaser for an upcoming movie. (Photo: China Daily)

An upcoming film's teaser, which features an elderly man's search for a cartoon character in rural China, went viral on the internet for its tear-jerking yet hilarious rendition of family bonds, as Chinese New Year－a traditional time for family reunions－approaches.

The video, titled What Is Peppa? was rolled out on Thursday to promote a live-action-animation hybrid movie that features an animated figure named Peppa Pig. It is scheduled to hit big screens on Feb 5, the first day of the Chinese lunar calendar's Year of the Pig.

The teaser begins with an old man in a mountainous rural village asking his grandson on the phone what New Year's gifts the child wanted. He only heard the word "Peppa" because of a poor mobile signal. And so the man went on a journey to find out what the boy meant.

Humorous moments followed, as the grandfather, Li Yubao, mistook a bottle of shampoo, a female live streamer and a chess piece for the porcine character Peppa during his search. Each pronunciation is close to "Peppa" in Chinese.

With the help of neighbors, Li managed to make a Peppa model out of an iron-and-steel air blower. The crude yet heartwarming model left the entire family in awe and surprise when Li reunited with them in their urban home for the New Year's feast and presented the gift.

Within 24 hours of its release, the emotional tale racked up 187,000 reposts and 165,000 likes on the micro-blogging platform Weibo, with many commenting that it had brought them to tears.

Xu Lili, 40, a white-collar worker who shared the teaser on the instant-messaging app WeChat, said the simple, earnest love between family members that shines through the video resonated with her.

"It reminded me of my mom in her 70s after she mailed a package of homemade steamed buns to my daughter from our hometown," she said. "Like the Peppa Pig model, gifts made by the elderly are not fancy, but they always go the extra mile to help fulfill our wishes."

Peppa Pig, the little pink pig, originated in a British cartoon series and gained popularity among Chinese children and teenagers through social media apps and online streaming services. But the character has remained largely out-of-reach for the older generation, especially those in rural areas.

Zhang Dapeng, director of both the teaser and the upcoming film, told the Beijing News on Friday that he was inspired by the phenomenon that some seniors find the word "Peppa" baffling if they don't use the internet.

"We expected the search for Peppa to be intriguing and intricate. The lighthearted shooting style also helped it garner attention," he said, adding that both the teaser and the film are meant to convey the heartwarming feeling of family reunions during the Chinese New Year.

Zhu Fangjie, a recent graduate in Beijing, said watching the trailer, with its drum score and crafty editing, was sentimental and amusing.

"The sharp contrast between rural and urban culture memes, the seniors and the toddlers, the foreign animation character and traditional Chinese festival create lots of laughs," she said.

"It was released at a prime time, when the Chinese New Year is just around the corner. I believe a large number of adults have the experience of living apart and only visiting grandparents during the holidays. That's the common thread that struck chords with the audience."

The trailer has drawn mild backlash for its presentation of Chinese rural villages as completely out of sync with contemporary facilities, but most viewers defended the video.

A netizen on WeChat named Fengzhiyu, said as a native from a rural village he knows that some isolated towns in China are filled with elderly people, and so it's not surprising that nobody is aware of a pop culture icon like Peppa Pig.

"The video's narrative is convincing," he said.