CHINA 'Progress' on trade talks could set stage for deal

'Progress' on trade talks could set stage for deal 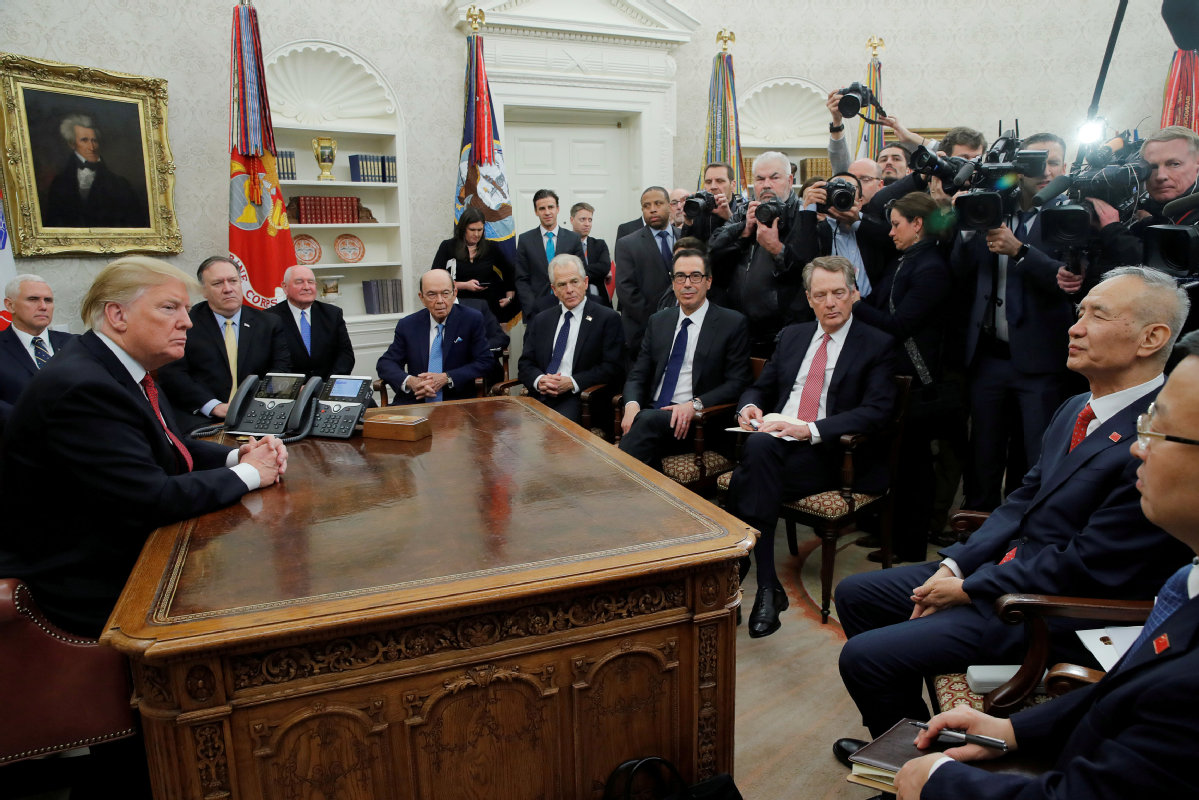 US President Donald Trump meets with China's Vice-Premier Liu He in the Oval Office of the White House in Washington, US, January 31, 2019. (Photo: China Daily)

Top Chinese and US trade negotiators have concluded their latest round of "candid, concrete and constructive" talks that would pave the way to a comprehensive deal the presidents of the two countries directed and probably would finalize when they meet, according to official sources.

Conducted under the guidance of the important consensuses Chinese President Xi Jinping and US President Donald Trump reached in their Argentina meeting on Dec 1, the two-day talks have made "important progress" for the current stage, according to a release from the Chinese delegation.

The high-level discussions, led by Chinese Vice-Premier Liu He and US Trade Representative Robert Lighthizer, were followed by a meeting between Trump and Liu in his Oval Office at the White House late Thursday afternoon.

Liu presented a message to Trump from Xi, in which the Chinese president said China-US relations are at a critically important stage, and that in their meeting in Argentina, they agreed to work together to build a bilateral relationship based on coordination, cooperation and stability.

"Guided by the agreement we reached, our economic teams have engaged in intensive consultations and made good progress," Xi said. "I hope our two sides will continue to act in a spirit of mutual respect and win-win cooperation and step up consultations by meeting each other halfway in order to reach an early agreement that works for the interests of both sides."

Such an agreement will send a positive signal to the two peoples and the broader international community. It will serve to ensure healthy development of China-US relations and contribute to steady growth of the world economy, Xi said, according to a Chinese press release.

Trump expressed thanks to Xi for the message, and said the current round of trade talks had made "tremendous" progress, and he expected the two sides to reach a "great deal". Such a deal would be of great significance to the two countries and the world as well, according to the release.

Trump also said Lighthizer and Treasury Secretary Steven Mnuchin would lead a US trade delegation to continue talks in China in mid-February. The president said he looked forward to meeting Xi as early as possible to witness the historical moment when the US and China reach agreement on their trade and economic issues.

Trump tweeted earlier in the day: "China's representatives and I are trying to do a complete deal, leaving NOTHING unresolved on the table. All of the many problems are being discussed and will be hopefully resolved.

"No final deal will be made until my friend President Xi, and I, meet in the near future to discuss and agree on some of the long standing and more difficult points," he said on his Twitter account.

Asked when he wanted to meet with Xi, Trump said, "We haven't set up a meeting yet. I think we're working on seeing where everybody is, and then we'll meet to discuss some final issues," adding "both countries would like to see a positive result".

During the two days of talks, Chinese and US negotiators discussed trade balance, technology transfer, intellectual property protection, non-tariff barriers, service industry, agriculture and enforcement mechanism, as well as issues of concern to the Chinese side, according to a statement from the Chinese delegation.

In particular, lead negotiators of the two sides had focused their discussions on trade balance, intellectual property protection, enforcement mechanisms and other topics of mutual interest and on issues of Chinese concern, according to the statement.

The two sides also clarified the timetable and roadmap for their further consultations.

Both sides attach high importance to intellectual property protection and technology transfer issues and agreed to ramp up cooperation in that regard, the statement said, adding that creating a fair competitive market environment aligns with China's reform and opening-up, and China will actively respond to US concerns.

The two sides agreed to implement effective measures to promote the balanced development of their bilateral trade.

China will vigorously expand imports of US farm produce, energy products, industrial, manufactured goods and service products to satisfy the needs of China's high-quality economic development and the people's pursuit of a better life, it said.

The two sides exchanged views on China's specific concerns, and the US will seriously respond to China's concerns, according to the statement.

In a statement released after the negotiations, the White House said high-ranking officials from the two countries have engaged in intense and productive negotiations over their economic relationship.

"The two sides showed a helpful willingness to engage on all major issues, and the negotiating sessions featured productive and technical discussions on how to resolve our differences."