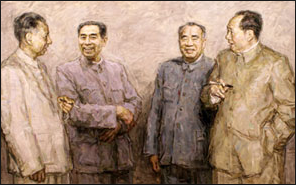 China should build an online "red film" library for elementary and high schools students to enhance cultural confidence, a national legislator said on Monday.   It's necessary to guide the young generation with excellent art works to help build cultural confidence and promote core socialist values, said Zhao Biao, president of the Changchun Film Studio Group.As a significant way to spread ideology, films themed on love for Party, for the country and for the people can help the young generation develop the correct values and worldview and better complete the mission of national rejuvenation, Zhao told the Global Times on the sidelines of the ongoing annual session of the National People's Congress (NPC) on Monday.In his proposal to the NPC last week, Zhao proposed that a group of experts be assembled to select such films for elementary and high schools students. He said the films can be included in an online film library. "If a student can watch five domestic films per year, he or she will watch at least 60 films from elementary to high school. The stories and personalities can inspire them to have greater cultural confidence and grow up in a healthy manner," said Zhao.     Zhao also suggested creating a national fund for copyrights and  film production. The films could include blockbusters and also classics that feature heroism, such as the film that features army hero Dong Cunrui, who sacrificed his life carrying explosives into an enemy bunker, Zhao said. Films selected in the project could receive funding, while new films can also receive no less than 5 million yuan ($790,000) if they are selected in the future, to encourage more patriotic films in the market and create a new trend in society, Zhao added. To ensure the screening of patriotic films, the State Administration of Press, Publication, Radio, Film and Television (SARFT), issued a document in February stating that 5,000 out of 50,000 movie halls nationwide will be selected as "people's cinemas" to screen designated mainstream films at normal times as well as important films on special occasions.