BEIJING, May 10 (Xinhua) -- Amid the robust recovery of the domestic tourism market following the effective containment of the COVID-19 epidemic in China, "red tourism" stands out. 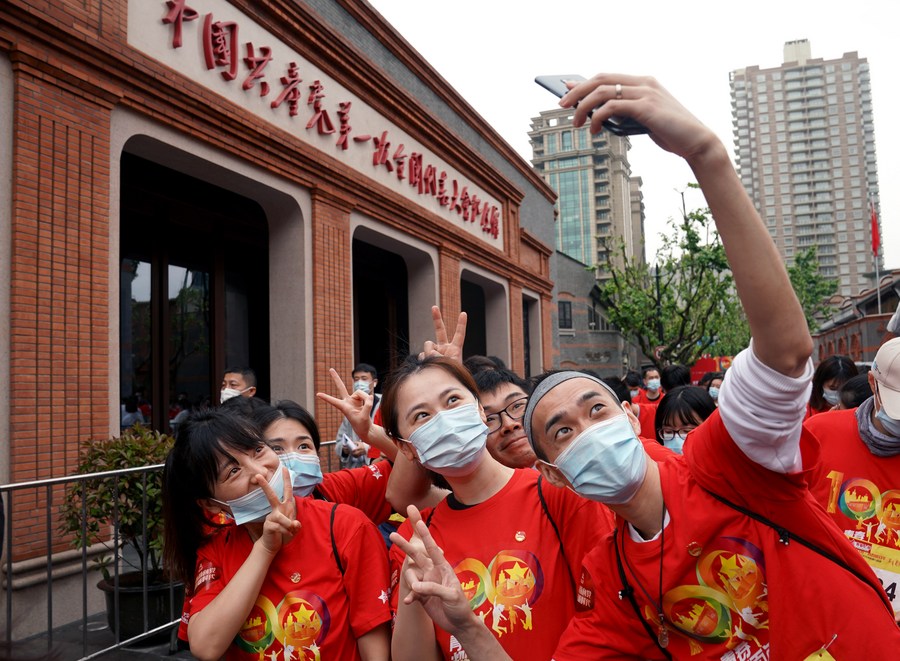 Young people pose for photos at the site of the first National Congress of the Communist Party of China in Shanghai, east China, May 4, 2021. (Xinhua/Liu Ying)

Red tourism, which refers to visiting historical sites with a modern revolutionary legacy, has become the top choice of many Chinese tourists this year.

This year marks the 100th anniversary of the Communist Party of China (CPC).

According to a report recently released by online travel booking platform Ctrip and Xinhua Finance, during the just-concluded May Day holiday, online searches for "red tourism" surged about sevenfold from last month and red tourism orders placed on Ctrip rose 375 percent compared with the same period in 2019.

In Longyan City of east China's Fujian Province, the former site of the Gutian Meeting, a landmark event in the history of the CPC and the army, witnessed a peak in visitor numbers during the holiday.

Among the flocks of tourists was 72-year-old Chen Bingyin from northwest China's Shaanxi Province. "As a veteran Party member, I joined a red tourism tour group to revisit our history," he said.

The tour group took Chen to two other revolutionary areas in neighboring Jiangxi Province before arriving in Fujian.

Zhang Lianqiu, 68, chose to drive all the way from Xinjiang in the northwest to Jiangxi's Jinggangshan with his friends to visit the red sites.

"I have learned the revolution stories that happened in Jinggangshan since childhood, and coming here is like a dream come true," said Zhang enthusiastically.

Yet it is not just senior citizens turning to red tourism.

A recent report on red tourism during the Tomb-sweeping Day holiday in early April and the May Day holiday indicated a general trend of an increasing number of younger individuals among the tourists.

Li Yanan, a guide at a commemorative park marking the victory of the Central Red Army's Long March in Shaanxi Province, has also noticed the change in tourist demographics.

Before the visitors were mostly elderly people and from the locality, but that picture has gradually shifted to include different age groups and people from outside the region, according to Li.

The rising popularity of red tourism among young people may be partly attributed to the promotion of more creative tourist products, many of which employ new technologies such as artificial intelligence and virtual reality.

"Red tourism is no longer just about visiting historical sites and museums. Instead, it is now designed to cater to the interests of young people, highlighting an immersive experience or offering time travel scenarios to attract more young visitors," said Xu Yongde, a staffer at a revolutionary site in southwest China's Guizhou Province.