It is said the mid-autumn moon evokes nostalgia, a love of family and country in every traditional Chinese heart, a thousand-year-old tradition that spiritually bonds the Chinese people. 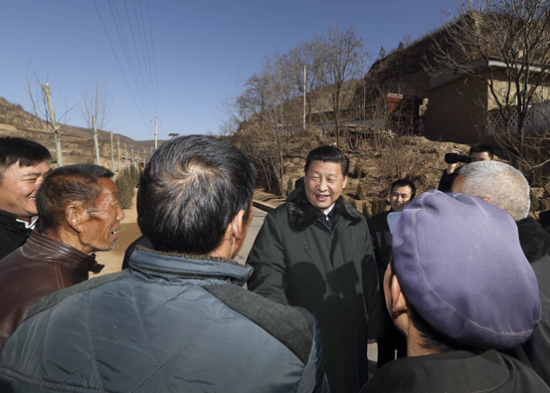 Xi Jinping visits Liangjiahe Village in Shaanxi Province ahead of the Spring Festival in 2015. (Photo: Xinhua)

"What is 'nostalgia'? It means you will miss this place if you leave,"President Xi Jinping once said.

The president has mentioned the word many times to illustrate how much he cares for the country and the people.

During the two sessions in 2014, Xi mentioned a small bowl of rice noodles with beef he ate in the 1990s while participating in a national event for poverty alleviation in Guiyang, capital of Guizhou Province.

Ordinary as such a bowl might seem, the taste aroused in him nostalgia, memories of happiness and emotions for old places.

On the eve of the Spring Festival in 2015, Xi visited Shaanxi Province. He went to Liangjiahe Village in Yan'an. Previously he had spent seven unforgettable years there working as an educated urban youth.

When he first arrived there at age 15, Xi recalled he was "confused and helpless," but when he left at 22, "I was determined and confident."

Since he left, Xi has followed the development and changes in Liangjiahe.

He wrote back to the villagers four times to express his nostalgia as"a few times back to Yan'an in my dream."

It is the spiritual power that motivates the country to continuously develop and grow. In other words, Chinese culture is engraved on the genes of the Chinese people. 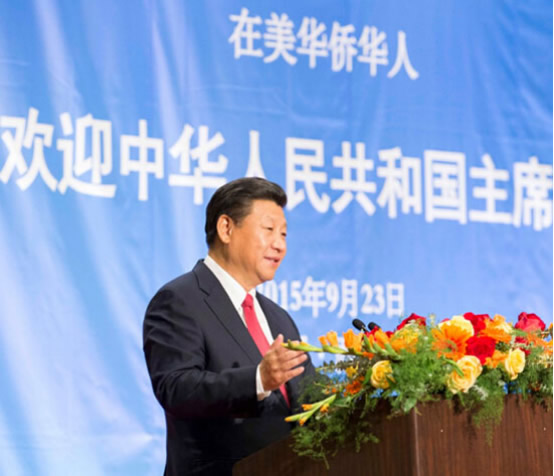 President Xi Jinping and his wife Peng Liyuan attend a reception in Seattle hosted by the Chinese community in the US on September 23, 2015. (Photo: Xinhua)

"Looking at the sky reminds me of my hometown," Xi said, citing a poem by Zhang Jiuling to express the nostalgia of overseas wanderers.

"I know you miss your family and hometown thousands of miles away, and they are missing you too," Xi said.

The Mid-Autumn Festival has a historical and cultural heft including the bond of family and nation.

Love of family and nation is the pursuit of prosperity of the country and the happiness of the people. It represents identity, belonging, responsibility and mission to the country and a deep cultural psychological code.

"The extensive and profound traditional culture of the Chinese nation supports us to stand still in the global cultural collision, and to grow prosperously from generation to generation,"Xi has said.

"The house is neat and quaint, better than a Western-style house," Xi said. "Nostalgia is here."

He told Li:"I admire you living in the courtyard and I wish I could stay longer."

In 2013 at a central urbanization work conference in Beijing Xi proposed that urban residents should "see the mountains, see the water and feel nostalgia."

"Nostalgia" means attention should be paid to preserving the original landscape in the process of promoting urbanization.

The National New-Type Urbanization Plan (2014-2020) released in 2014 pointed out that China's new path of urbanization should include the following features: upholding a people-oriented principle, integrating the development of industrialization, IT application, urbanization and agricultural modernization, improving the spatial layout, protecting the ecological environment and passing on Chinese culture.

Advanced urbanization should integrate the city with nature and harmonize modern elements with historical treasures.

"To build a new socialist countryside, we should plan first, follow the rules of the rural development and make up for the shortcomings and strengthen the advantages of the countryside," Xi said at the rural reform symposium in Xiaogang Village, Anhui Province on April 25, 2016.

"The rural flavor and landscape, and nostalgia in people's minds should be retained."

(Translated by Song Zhe and edited by Huang Jingjing and Zhan Huilan; original story from Xinhua)