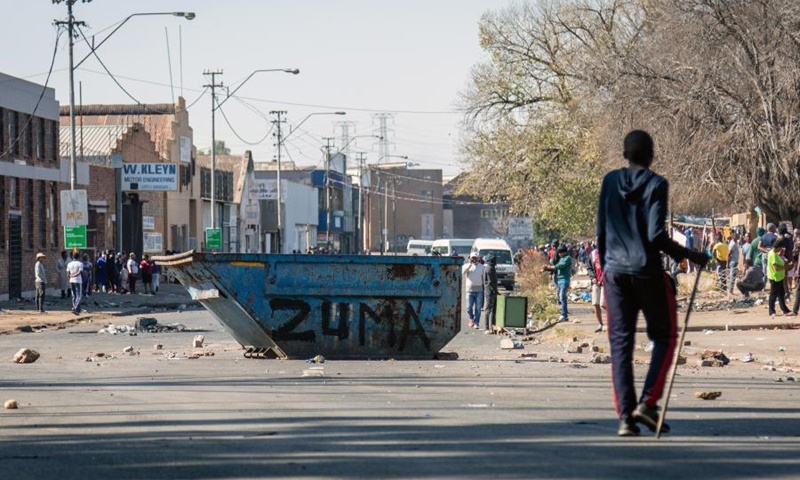 Overseas Chinese in South Africa told the Global Times on Friday that despite suffering property damage and some scary moments during ongoing riots in South Africa, the safety of the Chinese people has been safeguarded, especially thanks to the joint efforts within the Chinese community and diplomatic efforts made by the Chinese government.

Also on Friday, Zhao Lijian, spokesperson of Chinese Foreign Ministry, said that the Chinese government shares concern over the severe property damage and threats to the safety of Chinese citizens amongst ongoing South African riots, and have asked the country to step up protection of Chinese citizens and businesses, and hope social and economic stability can be restored as soon as possible.

As the death toll surged to 117 with 2,203 arrested for theft and vandalism in the latest unrest, the South African government said on Thursday that 10,000 soldiers were deployed on the streets and the South African National Defence Force has also called up its 12,000 army reserves to halt the riot, media reported.

The social turmoil that boiled over last week was sparked by the jailing of South African former leader Jacob Zuma who was accused for refusing to comply with a court order to testify at a state-backed inquiry investigating allegations of corruption, the AP reported.

On Thursday, China's ambassador to South Africa Chen Xiaodong expressed concern and resolve over the phone to overseas Chinese and Chinese enterprises who suffered severe property losses in the riots.

According to the Chinese embassy, it has triggered the emergency response mechanism immediately after the incidents and has met with a number of officials from South African government, military and police. The two countries agreed to maintain close communication, provide immediate rescue and jointly safeguard the personal and property safety of Chinese citizens in South Africa.

Some overseas Chinese in South Africa said that although some Chinese are scared and frustrated about the riots that threatened their security and businesses, the overall situation is stable. And all they want is to end the turmoil as soon as possible.

Billy Huang, the head of Canton Chamber of Commerce in South Africa told the Global Times on Friday that roughly estimated, the unrest has led to hundreds of millions yuan in property losses for overseas Chinese in South Africa.

They noted that they have formed 24-hour self-defense teams in different cities, and over one thousand shops, warehouses and factories in KwaZulu-Natal province and Johannesburg region were protected safely.

Self-defense teams were voluntarily formed by overseas Chinese and the security companies they hired, said Huang, noting that the group put the neighborhood on lockdown, and armed if necessary. And about 200 Chinese join the team in Durban, Huang said.

Some areas are even equipped with armored vehicles to patrol the Chinese residential areas, Global Times learned.

"Every Chinese mall and factory has its own WeChat group that follows the riots around the clock… Once there is a riot somewhere, the time, place and scale are quickly spread across the WeChat groups, thus correct responses can be made," Xu said.

There has been a history of riots in South Africa before, however none of which was as serious as this one. Fortunately, overseas Chinese have enough experience and vigilance in dealing with the unrest, Xu said.

The situation is gradually cooling down, with some malls expected to re-open next Monday, Xu said, citing information in a WeChat group.

We have urged all Chinese to supervise each other and not buy the stolen goods illegal obtained by the rioters, Xu said.