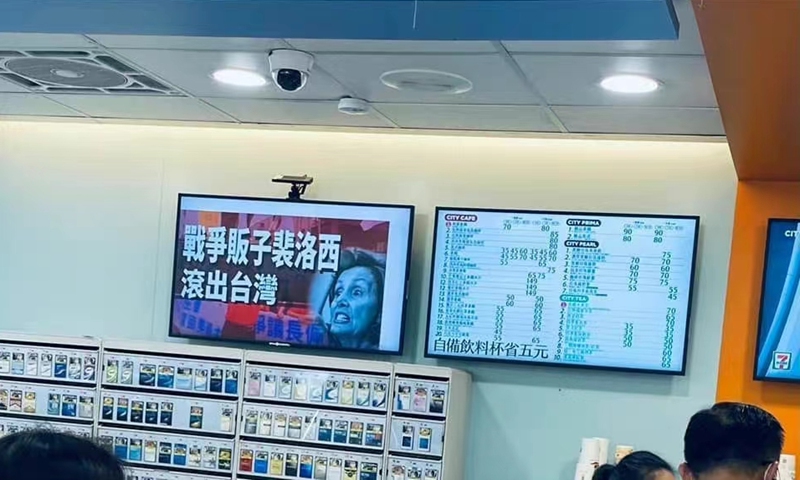 Screens at multiple 7-Eleven stores on the island of Taiwan are found showing the words "war monger Pelosi get out of Taiwan" on August 3, 2022. (Photo: from webite)

Chinese netizens have swarmed to social media to express firm and full support for and confidence in the central government's measures to tackle the US after Chinese Foreign Ministry on Friday announced countermeasures against the US' provocation and sanctions against US House Speaker Nancy Pelosi due to her Taiwan island visit.

This is a slap in the face of some US media, which recently claimed that Chinese people are losing faith in the government amid the ongoing Taiwan Straits tension.

Chinese Foreign Ministry spokesperson Hua Chunying on Friday afternoon announced sanctions on Pelosi and her immediate family in accordance with the law, for seriously undermining China's sovereignty and territorial integrity, trampling on the one-China principle, and threatening the peace and stability of the Taiwan Straits.

On the same day, China also announced countermeasures against the US, canceling or suspending bilateral cooperation in eight fields.

Though many netizens in the Chinese mainland expressed disappointment after Pelosi landed in Taipei on Tuesday, they came to understand and support the government's multiple countermeasures in the military, diplomatic and economic areas. The people have never lost confidence in the government, and China fully understands the importance of patience and calmness, observers said.

"Sanction Pelosi" soon became the top trending topic on Sina Weibo, with over 240 million reads and 36,000 comments within an hour after the announcement. Meanwhile, five other topics related to the fallout of Pelosi's visit were on the top 10 trending list, including the People's Liberation Army (PLA)'s missile launches during the drills.

"It was not honest to say I was not upset after Pelosi landed in Taiwan, but my heart revived after seeing our counterattack!" said a Weibo user.

"Now I understand that the great power game is a long-lasting one. I trust my country!" said another net user.

What comes will come, said a netizen, "'God of stocks of Capitol Hill' has come to her twilight."

Analysts said that netizens' full understanding and firm support of the central government has given the US media a "resounding slap in the face." Earlier on Friday, the Voice of America released a report with sarcastic tone, saying that Beijing was burned by its populist fire, as people were frustrated and angry that the government's responses were weaker than expected. The New York Times on Thursday also hyped netizen's anger about Pelosi's visit as the "perils of preaching nationalism."

"It is obvious that VOA faithfully performs the role of a propaganda tool managed by the US Agency for Global Media, and sets off a new round of a public opinion offensive against China, which is actually quite weak… while The New York Times report is just biased and unprofessional," said Shen Yi, a professor at the School of International Relations and Public Affairs of Fudan University.

"The Chinese government has exercised restraint based on reason and the value of peace," Shen said.

Wang Yu-ching, a Taiwan cross-Straits observer who lives in the mainland, told the Global Times that the US is trying to stir up internal tensions in the mainland by distorting exaggerated reports of "discontent."

Whether it is complaints, support or anger from netizens, there is one thing that is consistent with the central government: firmly defending China's territory and sovereignty and the reunification of the motherland, which has nothing to do with a backlash against the government and Party, as the US media said, experts said.

"During the Civil War, didn't people want a united and strong America?" Wang asked, "Chinese people today are fully aware that the central government will not sit idly by when facing Taiwan secessionists' and US politicians' provocation."

The PLA on Thursday commenced the second phase of its large-scale military exercises that completely locked down the island of Taiwan, and began to use live fire following the first phase of preparations. China's Vice Foreign Minister Xie Feng summoned US Ambassador to China Nicholas Burns overnight to protest against Pelosi's visit to Taiwan island.

People have even more trust in the government and believe that China is playing a big game in the long run, he said.

Wang said the short-term mood swings of Chinese mainland netizens should be seen as a positive interaction between the people and the government in a democratic system.

Instead of piecing together material to attack China, the US media should reflect on the passive situation brought by Pelosi's visit to the island of Taiwan, especially when the mainland's military exercises send strong signals of deterrence and determination, Shen said.