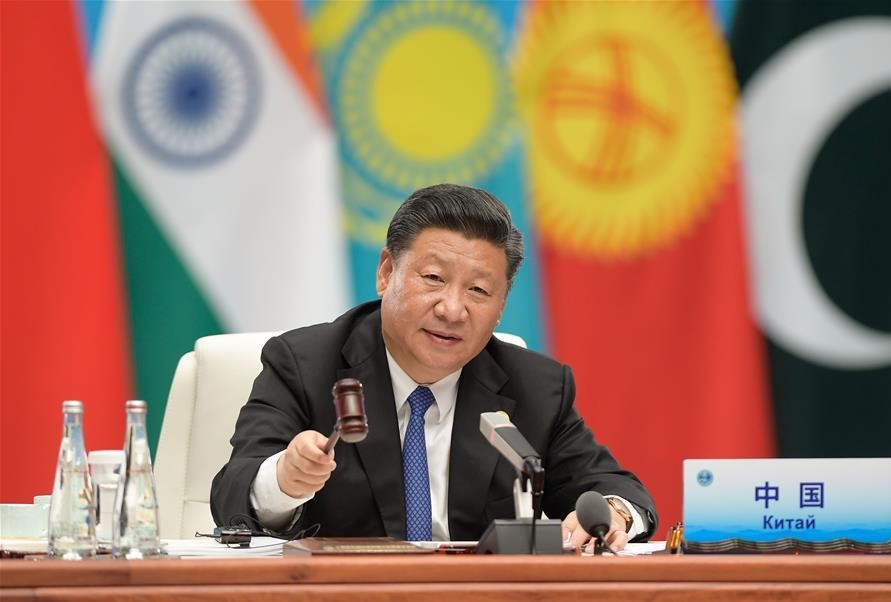 Rashid Alimov, secretary-general of the Shanghai Cooperation Organization (SCO), said the 18th SCO Summit in east China's Qingdao has opened a "new page" in the history of the regional bloc.

"Excellent! I think it was amazing," Alimov told CGTN reporter Su Yuting after the conclusion of the two-day event on Sunday.

"Today is substantive and yesterday was very emotional."

The senior SCO official explained that he was impressed by Sunday's meetings and signing ceremony as well as Saturday's evening gala.

Over the weekend, leaders of SCO member countries gathered for their first summit after the bloc's expansion last year. With the accession of India and Pakistan as full members, the organization now has eight member states, four observer states and six dialogue partners.

Chinese President Xi Jinping called for "unity and harmony" among the member states at the welcome banquet of the summit on Saturday night.

At the official meetings on Sunday, he highlighted the Shanghai Spirit and called on SCO members to build up strength and mutual trust again.

"The Shanghai Spirit is our shared asset, and the SCO is our shared home," Xi said. "We should, guided by the Shanghai Spirit, work closely to build an SCO community with a shared future, move toward a new type of international relations, and build an open, inclusive, clean and beautiful world that enjoys lasting peace, universal security, and common prosperity."

As the backbone of the SCO, the Shanghai Spirit refers to a set of values including mutual trust, mutual benefit, equality, consultation, respect for diversity of civilizations and pursuit of common development.

The SCO member states should respect each other's choice of development paths and accommodate each other's core interests and major concerns, said the Chinese president.

"We should enhance mutual understanding by putting ourselves in others' positions and boost harmony and unity by seeking common ground and setting aside differences," he added.

Russian President Vladimir Putin said the SCO can serve as a platform for settling disputes between neighboring countries.

"We can solve a series of problems within the multilateral or bilateral frameworks," he said at a press conference after the summit.

After last year's membership expansion, the SCO now accounts for about 20 percent of the global economy and some 40 percent of its population. Xi said efforts should be made to promote integrated development of the diverse region.

"We point out that economic globalization and regional integration are the compelling trend of our times," Xi said.

"All parties will continue to work in line with the principle of mutual benefit to improve regional economic cooperation arrangements, enhance the Belt and Road cooperation and complementarity of our respective development strategies, deepen cooperation in business, investment, finance, connectivity and agriculture, advance trade and investment facilitation, and foster new prospects for integrated development of the region to deliver benefits to our people and add fresh impetus to global growth," he added.

To facilitate regional integration and win-win cooperation, China will set up a 30-billion-yuan (4.7 billion US dollars) equivalent special lending facility within the framework of the Inter-Bank Consortium of the SCO, Xi announced.

He also pledged China will train 2,000 law enforcement officers for all parties in the next three years to enhance law enforcement – an effort to support the SCO's fight against the "three evil forces," namely, terrorism, separatism and extremism.

The leaders of SCO member states signed the Qingdao Declaration and the Outline for the Implementation of the Treaty on Long-Term Good Neighborliness, Friendship and Cooperation, and decided that Kyrgyzstan will host the 2019 summit.