By Sun Ruisheng in Taiyuan and Li Yang | China Daily 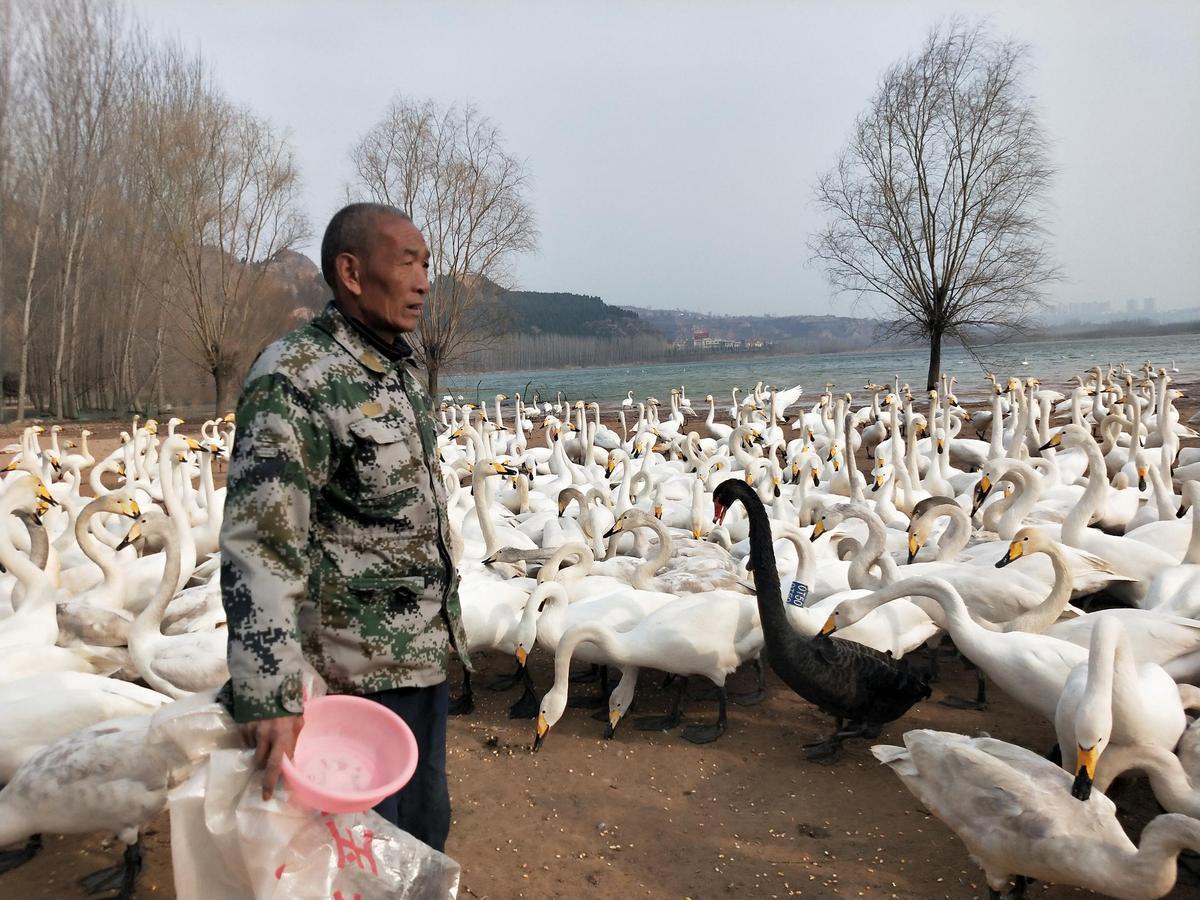 "In early spring, when I lie in bed I can clearly hear the bugles of the swans," said He Jianxi, a 66-year-old farmer from Sanwan village in Pinglu county, Shanxi province.

The "swan father" considered the chorus of calls from thousands of white swans that have wintered in the Pinglu section of the Yellow River as a farewell call before their return to Siberia.

He has been working for 19 years as a patrolman in the Sanwan Yellow River Wetland Park that covers an area of more than 6,000 hectares and where the swans stay from October to March.

Over those months, his daily task is to feed and protect his avian guests. "I have to guarantee they eat well and sleep well here," said He, who starts preparing food for the swans at 6:30 in the morning. Mealtimes are at 8:00 am, noon and 4:00 pm.

If the weather is good, about 200 kilograms of fodder made of cabbage and corn is enough as the birds can forage in the water. However, if the river is frozen, the swans need about five times the amount of fodder. He's co-worker Wei Jingyi helps prepare the food on cold days when the workload is too much for one man.

The first time He fed the birds is fresh in his memory. "The wild birds are clever and wary. They shunned me and regarded me as a danger," He said. "But after I stayed with them for a long time, they got familiar with me and slowly began to get closer."

Honk, if you're happy

Now, the swans and He are good friends. Once he blows his whistle, the birds flock to him from all directions anxiously waiting for the feeding session. He describes it as "a hundred responses to a single call", earning him the sobriquets the "swan father" and "swan commander" from those who have witnessed the phenomenon.

After the early feeding, He patrols 5 kilometers of the Yellow River's banks to check for injured or sick swans. Over almost two decades, he has saved more than 100 sick and wounded birds.

"They are like my children," he said. "You know that anxious feeling of parents when their kids are ill. That's how I feel when I find they are in need of help."

The swan he cares most about is the "Little Red Neck", a male swan wearing a red loop with the number tag "F55" attached to it. It is not known who tagged the bird. Ten years ago, He encountered the bird in the wetland when the swan was with its mate.

The swan, his partner and their offspring returned to the wetland every autumn until 2017, when Little Red Neck flew back alone. "Probably, his wife died by accident," He said with a sorrowful look. "It is a long and arduous migratory journey, and it is a dangerous world."

Talking about Little Red Neck only consolidates He's resolve to fulfill his duty as a guardian of the birds. "I am not alone in the cause," he said. 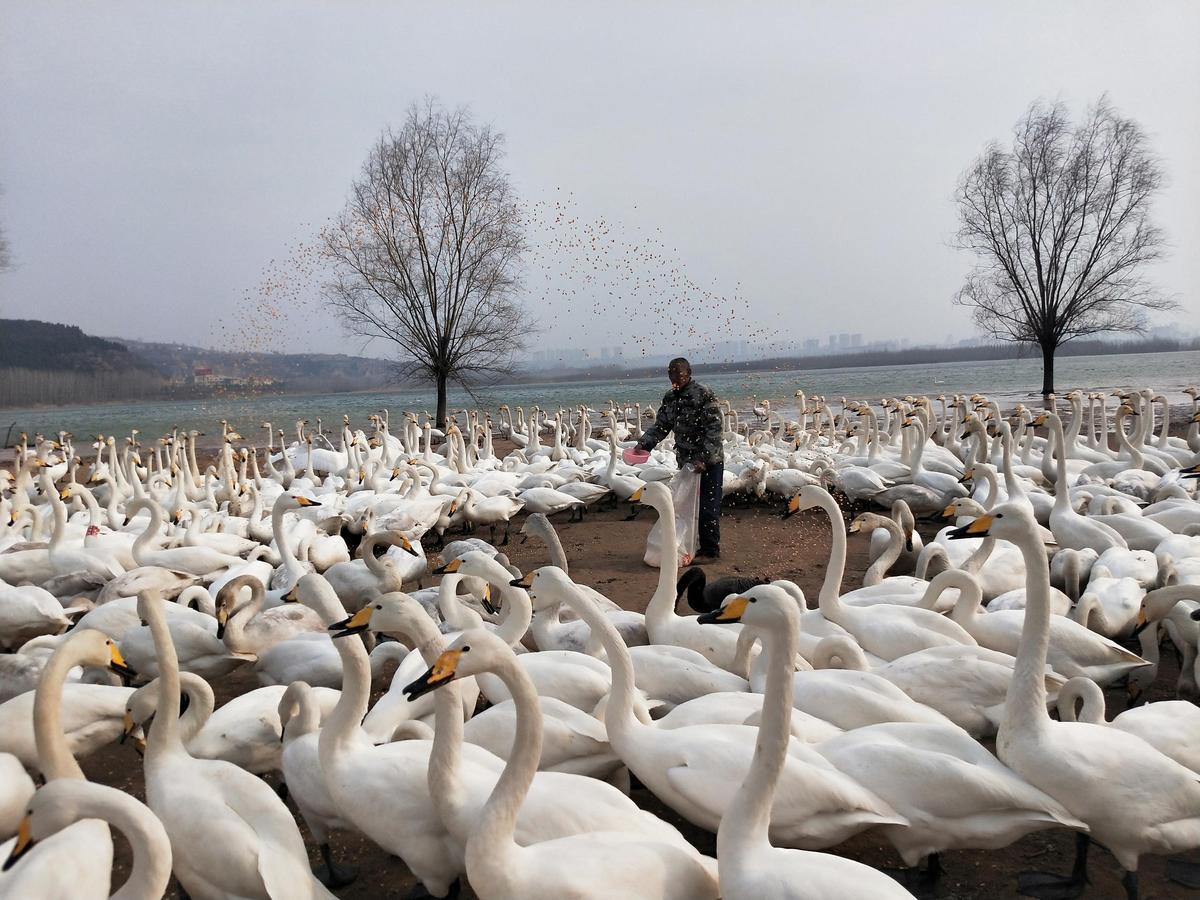 Shanxi provincial authorities have issued special instructions and provided strong support for the protection of migratory birds in a bid to make Pinglu a safe haven for the birds. The county government has also strengthened protection of the wetland.

It has spent 630,000 yuan ($96,900) every year since 2014 to subsidize farmers living near the wetland to return grain plots to wetland and to buy patrol boats.

A total of 20 million yuan has also been invested in expanding forest near the wetland by 167 hectares to create more habitats for the swans.

The Yellow River wetland administrative department has compensated the farmers for their losses in agricultural production due to the wetland protection projects.

The migratory swans first came to Pinglu in the 1970s. Initially, farmers thought of them as pests, but they later learned to accept them.

Li Xiaoping, head of the wild animal protection station of the Pinglu forestry bureau, said farmers are now leading efforts to look after the wild birds.

The number of swans wintering in Pinglu has increased from less than 100 in the beginning to tens of thousands today.

"There is a consensus on protecting swans among local residents," Li said. "Since I took over the post in 2002, there has not been a single incident of hurting or poaching the swans. They are like our close neighbors."

He Jianxi is happy when visiting photographers tell him the wetland park is the only place in the country where people can watch wild swans on such a large scale at close range.

"It is because the swans have built up their trust in local residents," He said, adding he is proud of his role in cultivating that trust.

The swans have attracted large numbers of onlookers, and fueled a boom in the catering and tourism industries.

However, He is aware the swans are only transient visitors. "Spring came early this year so the swans left early. Little Red Neck departed on Feb 18," he said.

As of early last month, almost all the swans had left to fly north. But He is already counting down the days until his "children, neighbors and friends" return for their winter sojourn "safe and sound".