In a room of a quarantine hotel in Baiyun district of Guangzhou, the capital city of Guangdong Province, Zheng Shuanglong, a 50-year-old volunteer, was talking to a 7-year-old boy. 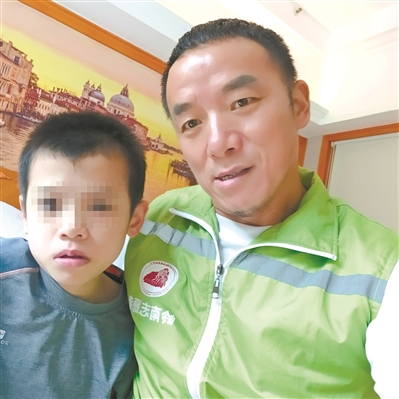 The boy, who has special needs and is unable to communicate or take care of himself, was quarantining alone in a hotel.

Zheng has worked for 10 days as what media reports called a "temporary father."

Every day, Zheng fed and bathed the boy, and cleaned up the urine and feces-soiled floor, clothes and sheets.

"There's always someone who has to deal with certain hard things," Zheng said. "I really appreciate everyone's trust. I will definitely do the work well!"

On the evening of May 31, a worker on Songzhou Street found a street child who could barely control his own behavior and who could not communicate. Residents and police planned to send him to an orphanage.

Pandemic prevention regulations require a negative COVID-19 test for admission to an orphanage, and 14 days of medical observation.

Authorities contacted Zheng, who has six years of volunteer experience.

On June 1, Zheng took the boy to the hotel for medical observation with the help of police.

The boy's communication difficulty made it hard for Zheng to help him adapt to the unfamiliar environment.

"Sometimes I had to change his clothes five or six times a day," Zheng said. "I spent most of the time washing clothes."

The boy could barely control his own behavior and needed Zheng at all times. Zheng helped pick bones out of the boy's fish meals, and sometimes gave his own meals to the boy.

"Once when I was washing his clothes he reached out to grab the garbage and put it in his mouth," Zheng said.

"I was afraid he would choke, so I used a spoon to feed him. He preferred to sleep on the sofa. I had to wait for him to fall asleep and then gently carry him to bed."

"At first, it was really exhausting," Zheng said.

The hotel staff helped Zheng every day. Some people donated toys and books to the boy. Volunteers also helped to give the boy a physical exam and offer psychological counseling.

Step by step, the boy began to pull Zheng's hand from time to time.

"Then he was willing to be hugged by me," Zheng said, "so all the efforts were rewarded."

Zheng felt relieved to learn that an orphanage had agreed to accept the boy after quarantine.

"I hope he will have a good home," Zheng said. "I will definitely go visit the little boy as long as I have spare time. After all, fate threw us together."