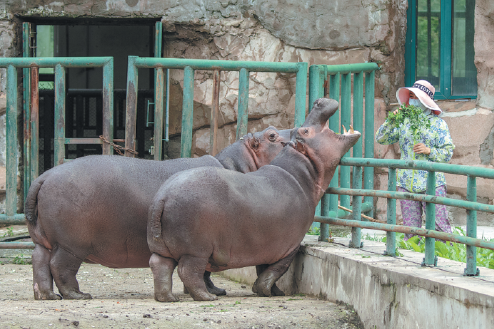 Chen Min, who has visited dozens of zoos in China and overseas over the past 17 months, believes they have all committed an "original sin" by depriving animals of their freedom. "That's why they should present animals in more valuable ways to atone for their crimes," said the 30-year-old from Wuhan, Hubei province.

Chen has become a self-appointed watchdog of zoos. From August to December last year, he visited 56 institutions in 41 Chinese cities to record the living conditions of the animals.

His online posts have made him popular and powerful. Chen shares his travel notes online and keeps updating his reviews of zoos on social media platforms. His Sina Weibo account has 3 million followers, including the official accounts of some zoos, who often respond to him or ask for advice. "Visiting all the zoos in the country was exhausting," he said. "I just hope my experience can call public attention to zoos, especially those near my followers."

A graduate of China University of Geosciences in Wuhan, Chen was one of the founders of Guokr, a web-based science and technology education community in China.

He worked as a new media editor on wildlife protection, and in 2011 came up with the idea of touring all the zoos in China. But he realized it was difficult to achieve his goal while working full-time, so he quit and became a freelance field researcher.

"I am the kind of person who makes decisions driven by his interests. I was keen on zoology from my sophomore year. That's why I studied bird calls at university and chose zoo research as my career," Chen said.

He mainly observes rare animals on his zoo visits and pays less attention to popular attractions, like tigers, lions and giraffes.

"For instance, a 'chubby chicken' we found on a road next to the panda pavilion in the Beijing Zoo was actually a Himalayan snowcock. It's so rare that only several zoos around the world are raising this species," Chen said. "I want to see more rare species bred and presented well in zoos."

"Taipei Zoo is the best in terms of educational presentation of animals," he said.

The zoo has divided its exhibitions into different sections based on animals' original habitats, such as a tropical rainforest area called the "Pangolin Dome" and enclosures for giant pandas and koala bears.

"Gathering together animals from similar regional habitats enhances a sense of exoticism, and gives a full picture of the regional ecology," Chen said.

The director of the Taipei Zoo often takes primary school students on a tour of a paddy field in the zoo, to educate them on the idea of peaceful coexistence with creatures, such as giant water bugs, in that environment.

"Nature education at Taipei Zoo goes far beyond the basic function of other zoos," Chen said.

While many zoos hope he will write something positive about them, the director of Hongshan Forest Zoo in Nanjing, Jiangsu province, sent Chen a message asking him to post its flaws on Weibo so it could learn and improve.

"Once I mentioned a fence in the zoo needed to be repaired to prevent visitors from feeding animals, they took action right away to fix it and showed me the photo," Chen said.

He also records the bad behavior of zoos, such as the mistreatment of animals, unsuitable environments for rare species and encouraging tourists to feed creatures.

Chen criticized a zoo in Shandong province which confined Binturongs on the ground as "a waste of scarce resources". Binturongs, omnivores also known as bearcats, are native to forests in Southeast Asia and dwell in the canopies of trees.

"The breeder usually supplies enough food for the animals, so if visitors feed the Binturongs, it leads to unbalanced nutrition and physical illnesses," he said.

Chen said if visitors reported zoos' poor handling of animals via Weibo, he would spread the information on his account and urge the zoos to improve their performance.

His four-month nationwide tour of zoos cost Chen 30,000 yuan ($4,286). "Sometimes friends paid for my meals during the journey, as they thought my objective of improving animal care in zoos was meaningful," he said.

Donations by readers on social media covered half of his costs, he said.

Despite their good intentions, Chen doesn't want his fans to follow his example and traipse around the country.

He believes it would be more helpful if they kept an eye on their local zoos and openly discussed ways to improve them.

This year, Chen has mainly focused on zoos and nature reserves abroad. He went to India earlier this month to observe wild animals.

Due to the lack of professional research, zoos in China may not reach a consensus that the proper breeding of animals ultimately helps a species flourish, Chen said.

He cited the example of rhinoceroses in Indian zoos that are kept in larger pools, compared with ones in China which are not as well looked after.

Chen plans to visit more nature reserves so he can gain a better understanding of how to provide captive animals with a more favorable environment.

"Zoos provide access to nature. Only by understanding the real living conditions of wild animals can we best simulate that environment in zoos," he said.