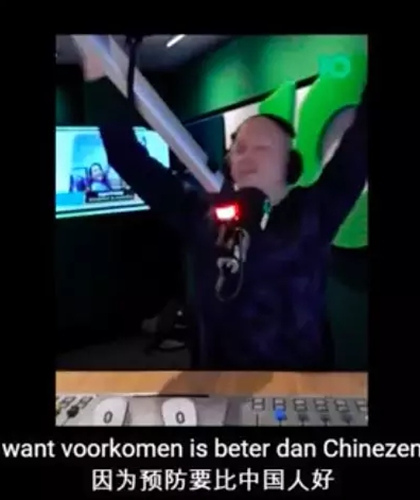 Chinese people in the Netherlands have launched an online petition hitting back at racial discrimination against Chinese and other Asians after a local radio station broadcast a song connecting the coronavirus to people with a Chinese background and warned listeners to stay away from Chinese food.

The petition "We are not viruses" was launched Saturday and garnered more than 17,000 signatures as of press time. "We say no to racism against Chinese (and all other Asians)," the petition says.

The petition came after a Radio 10 local program broadcast on Thursday, in which a host danced and sang a song that says the coronavirus was brought by "dirty Chinese people" and "if you don't want to get infected, please stay away from Chinese food." The program triggered an uproar and was slammed for being highly discriminatory and inhumane.

Host Lex Gaarthuis apologized on his Facebook page, saying that it was not the intention of Radio 10 and the makers of the program to hurt or discriminate against anyone. He said he certainly distanced himself from everything that is racism or hatred against anyone and that the song was meant as satire and humor. The excerpt was taken offline by all the radio's channels, he said.

"Why is it that there are people like Radio 10 who dare to connect a serious virus (the coronavirus) with people with a Chinese background and eating Chinese food?" says the petition. "This affects not only everyone who is Chinese, but also all Dutch people with an Asian background. A disease, a virus, you're not kidding about that. Would we also laugh if the song were about cancer?"

The petition also asks media to be responsible and do proper reporting. The petition demands politicians stand against racism and discrimination and for the radio station to sincerely apologize to all Chinese people who have been hurt by the song.

It is not the first time that Western media has tried to defame China and Chinese people by using the coronavirus epidemic. Although there have been no confirmed cases of the new coronavirus pneumonia (NCP) in the Netherlands so far, the country's ethnic Chinese and other Asian residents have been feeling the fallout in recent days. Fear of NCP has also fueled racist sentiment targeting Chinese and even Asians worldwide.

Last week, the Chinese Embassy in Germany criticized Der Spiegel magazine for causing panic and racial discrimination with its cover picture of a man wearing a red hoody, protective mask, goggles and earphones. The headline reads "Coronavirus made in China."

Dr Kai Rohs, founder of Dusseldorf-based Dr. Kai Rohs law firm, told the Global Times Sunday that his firm has filed a petition against the magazine to the news administration agency and received a reply saying it will investigate the case.

Meanwhile, he said the firm also filed suit against a columnist from the magazine who wrote an article warning people not to get too close to Asian people to prevent being infected. The article described Chinese people as "yellow-skinned and slant-eyed."

For the educated reader and for the reader who knows the German language well, the satirical elements of the text are identifiable - after carefully reading this article. But the satirical content "was not obvious," he said.

However, even satire can be a violation of the German Criminal Code if the text is characterized by content inciting people for national or racial reasons, he said.

Dr Rohs said he hoped Germans would show solidarity with the Chinese people suffering from deep-rooted resentment within Western society.

Shelley Jiang, an ethnic Chinese lawyer from the law firm, told the Global Times Sunday that she also posted a statement of charges on China's Twitter-like Sina Weibo platform, receiving more than 230,000 views in one day.

Jiang established a WeChat group in which more than 200 overseas Chinese came together to share their worries and anger about being discrimination in daily life.

One group member said her child refused to go to kindergarten as she was being discriminated against by her classmates and that she had no friends at school.

"A woman came to me for legal assistance because she was fired by her company due to discrimination over the virus," Jiang said.

Some Chinese students were also said to have been kicked out by German landlords fearing the virus infection, she said.

On Thursday, a White House petition was launched to express offense at the article "China is the real sick man of Asia" by Walter Russel Mead, published in the Wall Street Journal on Monday.

The petition said the reckless comments against innocent Chinese citizens would encourage racism and bring about repercussions against Chinese or other Asian ethnicities.

A proper apology from the paper has been demanded by the Chinese community.

A Chinese student of Mead in his foreign policy history and grand strategy class at Bard from 2013 to 2015 told the Global Times on Saturday that he thought the headline was so awful he wrote to Mead saying the phrase "Sick man of Asia" was an emotionally charged term for the Chinese community as it refers to an experience of exclusion and suffering in the past.

Mead responded in an email that in US newspapers, the headlines were chosen by editors not writers, and the writers do not even see the headlines until after the article is published, according to a screenshot of an email seen by the Global Times.

"I would not have chosen that headline and did not approve it," Mead said.