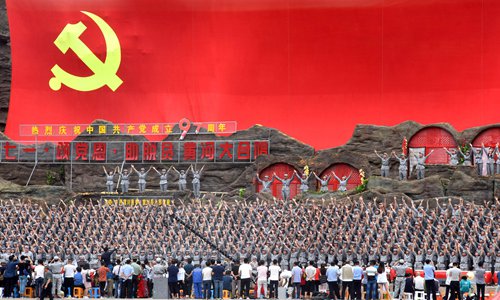 More than 1,000 people gather together to sing the "Yellow River Cantata" in Yichuan, Shaanxi Province on Friday. (Photo: VCG)

More than 1,000 Chinese gathered together in Yichuan county of Yan'an, Shaanxi Province, on Friday to sing the classic red song "Yellow River Cantata" as part of celebrations for the anniversary of the founding of the Communist Party of China (CPC), which is celebrated each year on July 1st. Organized by the local county government, the 97th anniversary event gathered local officials and ordinary workers near the famous Hukou Waterfall along the Yellow River to express local people's gratitude for the achievements of the Party and act as a morale booster as they continue poverty-relief efforts. Many tourists who visited the Hukou Waterfall that day were impressed by the grand scene, regarding it as a heart-warming and encouraging event. Yan'an is one of the most important cradles of Chinese revolution.The "Yellow River Cantata," composed by Xian Xinghai in 1939, is often associated with the War of Resistance against Japanese Aggression (1931-45). The song illustrates the Chinese people's indomitability and ability to deal with hardships. Over the past decades since it was first written, this representative red classic song continues to be sung on many important occasions in China today to remind people of the nation's bitter past as well as its strong spirit. Many other activities were held throughout the country over the weekend to strengthen Party solidarity and celebrate the Party's achievements, which include the development of the country's economy into the second largest in the world and lifting 700 million people out of poverty over the past 40 years.