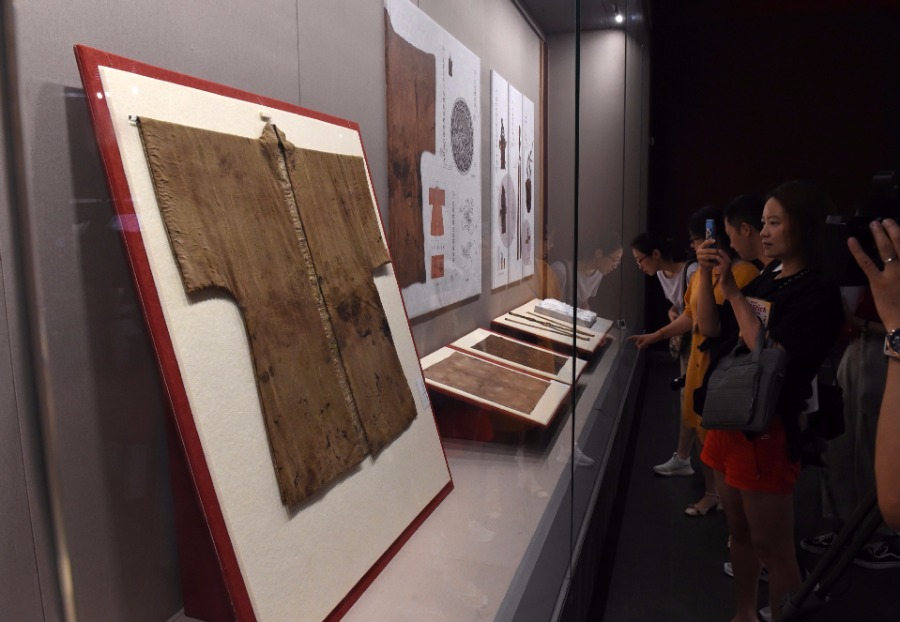 A total of 58 silk fabrics dating back to the Song Dynasty (960-1276) are on exhibit in the city of Nanjing, capital of East China's Jiangsu province.(Photo/Xinhua)

After ten years of restoration, the silk fabrics including handkerchiefs with inscriptions written by Buddhists and long-sleeve shirts with patterns of flowers and birds are now on display at the Grand Baoen Temple Heritage Park in Nanjing.

The exhibition will last until October.

In February 2007, the State Administration of Cultural Heritage approved the excavation of the Grand Baoen Temple ruins.

Cultural relics made from materials including gold, silver, bronze, crystal, glass, agate and silk were discovered at the site.

Archaeologists said those cultural relics were well preserved as they were buried nearly seven meters underground in an iron container. And around 100 silk fabrics excavated from the site are believed to have been donated by Buddhists to the temple.

The China National Silk Museum has been in charge of restoring the silk fabrics since 2009.

It is rare to find such a large amount of high-quality silk fabrics dating back to the Song Dynasty in China, according to the archaeologists.

The heritage park and Nanjing Museum will hold public forums about silk and silk products during the exhibition.