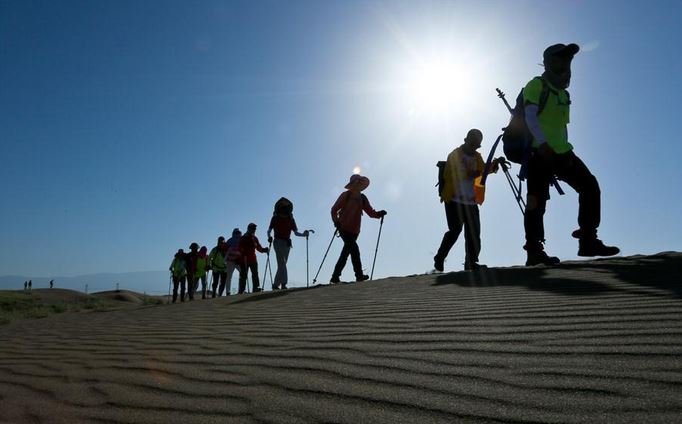 Over 1,200 lost hikers, mostly university students, were rescued after they called the police during a Gobi Desert hiking contest on Friday in Aksay Kazak autonomous county, Gansu province, according to the Beijing Youth Daily on Monday.

The police managed to locate their whereabouts based on the information and showed the direction for the way out, said Zhang Qiang, deputy director of the command center in the police bureau of the county, as the report showed.

The hiking contest was organized by a cultural development center in Changsha of Hunan province and a local outdoor activity center supported the activity, the report said, adding that in the 1,200-plus team of hikers, there were only seven coaches from the organizing centers.

The 1,200 hikers lost their way in the Gobi Desert in the county, which covers an area of 31,000 square kilometers with an average altitude of 3,200 meters. Some areas have forbidden cattle grazing to protect the environment, leaving them empty all year long.

The local temperature can approach 0 C at night though it hovers above 30 C during the day in the summer. But the hikers planned to stay outdoors at night, the police said.

The local police in the county also asked for joint search and rescue from neighboring areas including Dunhuang city police after receiving the report.

The police finally found the lost hikers at 2:40 am on Friday, according to the report.

The police warned that such outdoor activity organizers should inform the relevant authorities beforehand for the sake of security.