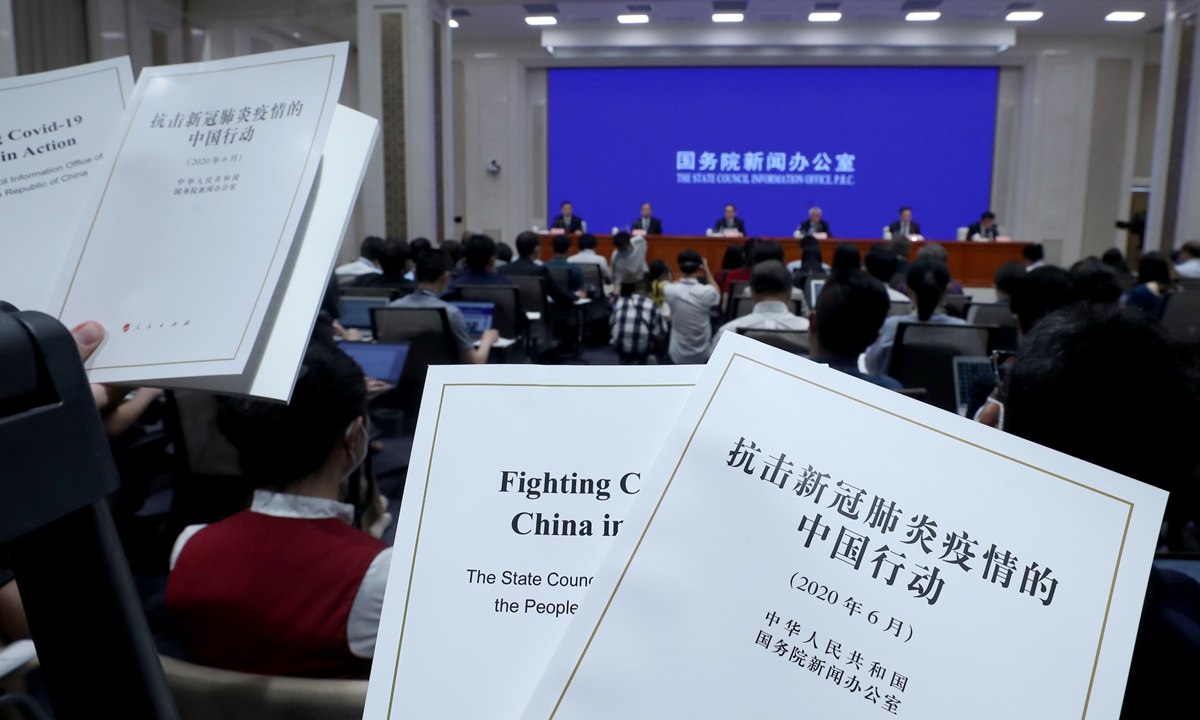 People may get various answers if they want to find out who helped China walk out of the COVID-19 predicament. The answers may include frontline doctors risking great danger to save lives; government departments which made detailed and effective viral prevention measures, scientists racing against time looking deep into the virus... The real answer is 1.4 billion Chinese people, who all fought like great warriors and contributed their fair share in this arduous battle.

The people are the greatest strength of China's battle against the virus, said Xu Lin, deputy head of the Publicity Department of the Communist Party of China Central Committee and minister of the State Council Information Office, said in a press conference marking the launch of the White Paper on fighting COVID-19: China in Action on Sunday.

All 1.4 billion Chinese people were "formidable force" for battling the virus, the paper says.

Regardless of gender, age or occupation, all Chinese "voluntarily participated in the people's fight against the virus," reads the paper.

The paper lists some, such as medical workers in protective suits running toward danger to save lives, the residents of Wuhan and Hubei who sacrificed their own interests during lockdown for people across the country, community workers, police and government officials who worked day and night.

It was the ordinary people who shouldered their responsibility and devoted their own fair share in this hard-won victory of the arduous battle, reads the paper.

During the press conference, Xu told the story of a woman in her 20s.

The daughter and both parents contracted coronavirus and were dispatched to different hospitals. The father died in February. The daughter used her father's WeChat to encourage her mother through treatment until both recovered and were discharged from the hospital. Internet users said they shed tears over the story.

On Friday US President Trump asked, "How come, Wuhan where it started was in a very bad trouble, but it did not go to any other parts of China."

The success, Chinese experts said, came through the sacrifice of rule-abiding Chinese people who fully implemented all the guidance of government for prevention and control of COVID-19. Everyone contributed in their position to help China get out of the impasse, the experts agreed.

"The response of the people was very positive which helped the government to control the epidemic in the shortest possible time," Asghar Muhammad, special correspondent of the Associated Press of Pakistan, told the Global Times.

Wang Guangfa, a respiratory expert at Peking University First Hospital told the Global Times, that he received a call in late January from a patient asking him to help test his brother.

The patient said his brother had a fever after dining with people from Wuhan, but refused to be tested and was still wandering around.

"He told me that if his brother got the virus and transmitted it to other people, he would be extremely guilty," said Wang.

Later the patient convinced his brother to take the test and it turned out he was not infected.

"I was so touched as I feel our Chinese people are so kind," Wang said. "They have been actively cooperating with the government's virus prevention measures and they have sacrificed a lot."

Wuhan doctor Zheng Li hasn't had a day off since late January.  "I thought I could catch a breath when there were few patients in our hospital. But later I got occupied by the 10-day citywide test," Zheng told the Global Times.

Working more than 10 hours a day during the test, soaked by rain, grilled by sun and risking the danger of patients vomiting on her at the tests, Zheng said nonetheless the situation was much better than the early days of Wuhan.

"Back in late January and February, we ran door to door testing people, without protective suits and wearing only unqualified masks," Zheng said.

"Sometimes when the patients coughed really hard, we just turned our head away, hoping to avoid infection.

"Thinking of it now makes me shiver, but back then, no one was having cold feet. We all wanted, or even fought to work on the frontline."

From 70-year-old medical experts to doctors in their 20s, millions of medical workers fought on the frontline of the country's virus battle, the paper said.

"They will be inked in the country's history and imprinted on the Chinese people's heart."

Ma Yu, a community worker in Beijing's Chaoyang district, has worked nearly nonstop since the government began to mobilize the grass-root community at the start of the outbreak in January.

Ma and others worked to identify at-risk people and checked their temperatures. They also delivered food and medicine to those in quarantine traveling from other countries.

"I have to talk to hundreds of people on my WeChat every day and charge my phone again and again."

Exhausted as she is, Ma said it was her responsibility. We are not doctors that can help save lives, but we can work to make sure no one in the community gets infected."

China brought the coronavirus epidemic under control "in the shortest time," Xu Yao, a research fellow at the human rights research center of Nankai University in Tianjin, told the Global Times, "an achievement that could not have been made without all people's participation and cooperation."

Everyone in China was a hero for fighting the virus - whether by going to the frontline to treat patients, checking temperatures at residential communities or just staying at home, Xu said.

Xu Lin described a young man born in the 90s from Central China's Hunan Province. Seeing the people living in great difficulties in Wuhan during the outbreak, he wrote in social media that "I am not afraid of death. I am afraid of living in regret." He left his hometown and went to Wuhan.

State media dubbed him the "most beautiful ferryman" as for months he drove medical workers to work and helped Wuhan people in need of a ride.

The white paper said organizations and individuals across the country have donated 38.93 billion yuan ($5.8 billion) and materials worth of 990 million to charity organizations fighting COVID-19.

The COVID-19 pandemic has united the country and inspired Chinese people's spirit of enduring hardship and solidarity in the face of crisis, Wang said.

Deeply influenced by Confucian culture for thousands of years, Chinese people know better than when there is a major threat to the whole of society, every individual needs to contribute to the collective and only unity can help overcome difficulties, Xu Yao told the Global Times.

"It's not blind obedience, but wisdom to know that without the safety of the collective, individuals will not survive," Xu Yao said.