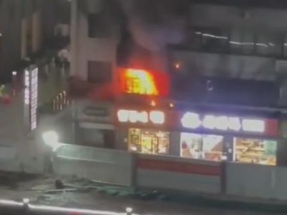 Photo: Screenshot from a video by Zhejiang Television

Two people are receiving medical treatment. Two other people have been discharged from hospital and 13 are still under medical observation in hospital, a statement from the Xihu district government said.

The person in charge of the outpatient clinic has been detained.

The fire was put out at around 9:56 pm Tuesday.

Investigation into the cause of the fire is under way.