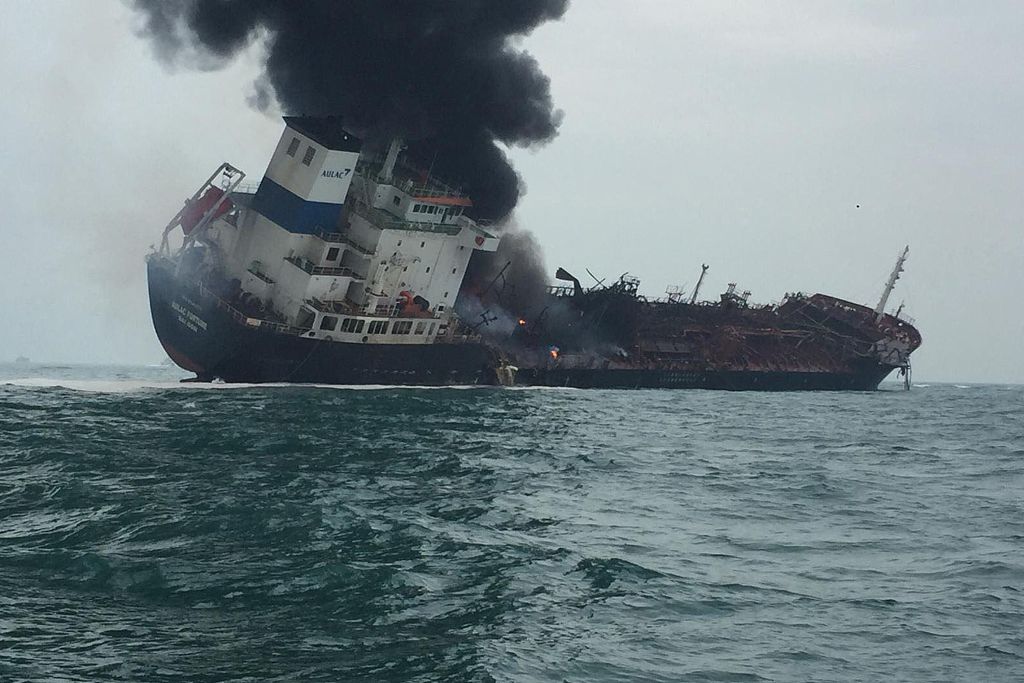 This handout photo taken on January 8, 2019 and released by the Hong Kong Police shows smoke rising from an oil tanker as it tilts to one side in the waters near Hong Kong. (Photo: VCG)

There were 25 crew members on the oil tanker and four workers on the barge.

Among the oil tanker crew members, one man was found dead at the scene, 22 were rescued from the sea, while two remained missing, according to Wong Wai Hong, deputy district commander of the Marine Port District of the Hong Kong Police Force.

A total of seven people were injured in the accident, including one worker on the barge. Among the injured crew members, one was seriously burned.

The FSD and the police deployed several vessels, 20 fire engines, 14 ambulances, four fire boat monitors and a total of 140 emergency crews to fight the blaze and rescue the victims.

The Government Flying Service (GFS) also deployed three helicopters with a total of 13 crew members to the scene to search for the missing.

Pictures released by the GFS showed a huge hole on the deck of the burning ship.

Danny Kwok, owner of a speedboat leasing business on the island, told Xinhua after returning from near the scene that the ship was tilted and the sea area around had been blockaded.

The oil tanker, registered in Vietnam, was on its way from China's Dongguan to Thailand when it stopped in waters of the HKSAR for refuelling.

All the crew members are Vietnamese. The Hong Kong police has informed the Consulate General of Vietnam in Hong Kong of the incident.

The HKSAR government's Marine Department said its oil spill control vessel has been deployed to the scene on standby, but no spill was spotted since the tanker was not carrying oil cargo when the accident happened.