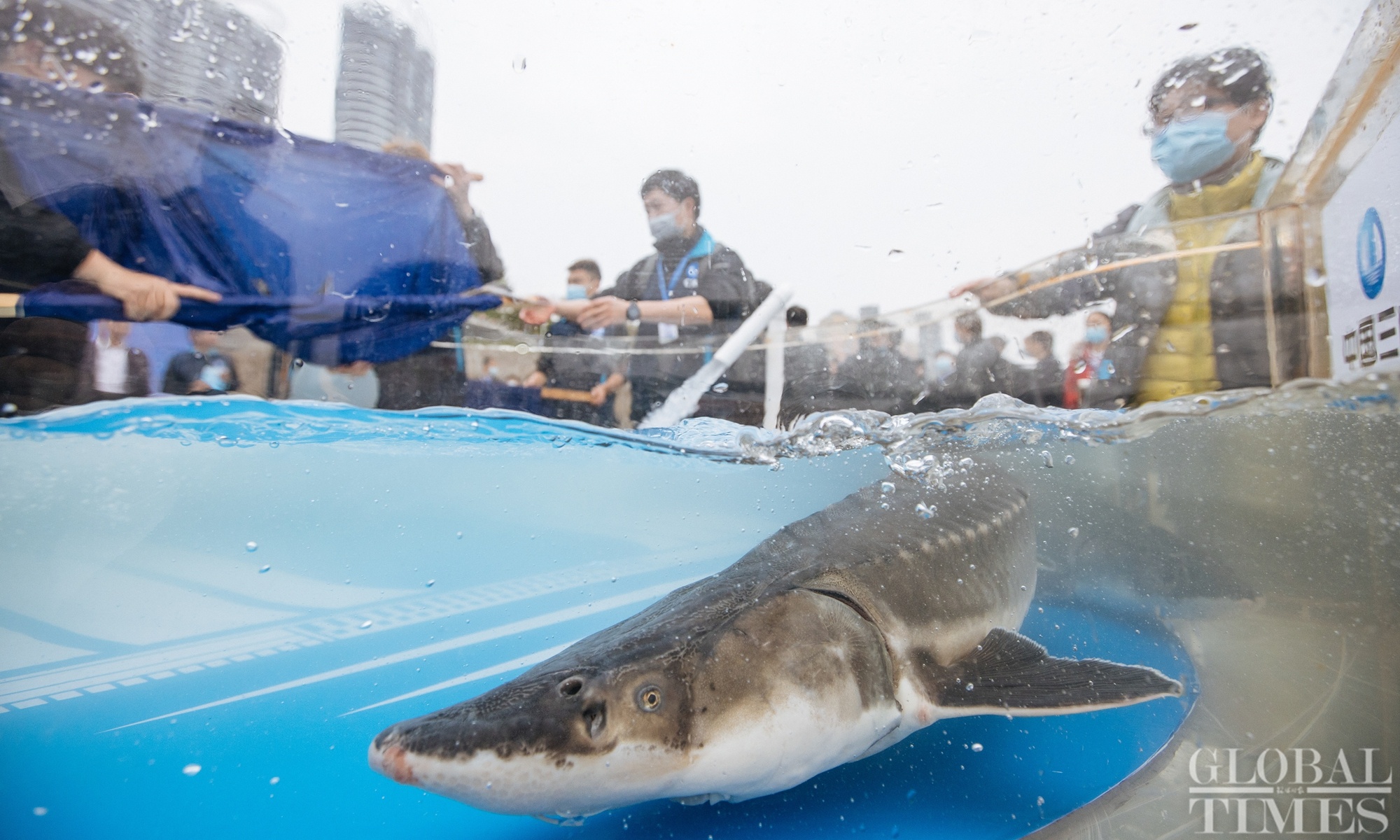 After a hiatus of two years, the surface of the Yangtze River Yichang section is once again lively after Central China's Hubei Province recovered from the COVID-19 epidemic.

Some 10,000 Chinese sturgeons, weighing more than 10,000 kilograms in total, left their familiar captive breeding environment and jumped into the Yangtze River on Saturday morning. They will swim from Yichang, Central China's Hubei Province, to the middle and lower reaches of the Yangtze River, eventually entering the ocean and returning to the Yangtze again to spawn after ten years.

This was the 64th release of Chinese sturgeons carried out by the Three Gorges Corp (TGC) since 1984. It is also the first release since Hubei recovered from the COVID-19 epidemic.

Officials and experts told the Global Times on Saturday that 2021 is the first year the 10-year fishing ban will be applied in pivotal waters of the Yangtze River, and also the first year the Yangtze River Protection Law comes into effect. The protection of Chinese sturgeons is an important initiative of the Three Gorges Dam Project for further operation and protection of the river in the future.

Through years of exploration, the research team affiliated to the TGC has been continuously optimizing the monitoring and protection of fish in the Three Gorges Reservoir Area. In recent years, there has been a wave of new hopes and good news from the protection of Chinese sturgeons and other natural resources in the area.

"Today's Chinese sturgeon release ceremony shows your love for the environment and pursuit of sustainable development. So I respect all of you and I'm glad to take part in this historic moment," said Moin ul Haque, the Pakistan Ambassador to China when attending the event. He also said he was touched by the determination and patience of Hubei residents in the face of the world's biggest health crisis.

"For Yichang residents, the Chinese sturgeon is the most familiar old friend. I was thrilled to witness this vibrant event after our province and our country had withstood the challenge of the epidemic," Zheng Yun, a nurse at the First People's Hospital, also the representative of the medical team from Yichang assisting Pakistan in the prevention and control of the COVID-19 epidemic, told the Global Times on Saturday.

According to the TGC, the Chinese sturgeons released into the Yangtze River this time spanned five year echelons, which were the most comprehensive age gradient in the history of the release, with the oldest sturgeon, born in 2009, growing to over two meters in length.

Known as the "panda in the water," the Chinese sturgeon is the flagship species of aquatic life in the Yangtze River. But due to overfishing, shipping and pollution accidents in the past, it is on the verge of extinction.

China banned the commercial fishing of Chinese sturgeon in 1983, and in 1988 listed it as a key protected wildlife species at the national level. In 2010, Chinese sturgeon was upgraded to a Critically Endangered status by the International Union for Conservation of Nature.

"Breeding and releasing has played a key role in replenishing the population resources and realizing sustainable reproduction of Chinese sturgeons," Jiang Wei, a senior engineer at Chinese Sturgeon Research Institute of TGC told the Global Times on Saturday. Jiang noted that optimizing release strategies and technical means of tracking and monitoring have become the most urgent tasks at present.

Jiang noted that the TGC has released more than 5.03 million Chinese sturgeons into the Yangtze River, benefiting from the continuous improvement of artificial breeding techniques. The Chinese Sturgeon Research Institute has also improved its monitoring and rescue system to further understand the migration and habitat distribution patterns of Chinese sturgeon and upgrade the release program. This includes adjusting the released ratio of male to female sturgeon, to reduce the loss of natural resources of Chinese sturgeon.

Statistics from the TGC show that the proportion of Chinese sturgeons released from Yichang eventually swimming into the sea has increased from 30 percent to 50 percent in the earlier period to 73 percent in 2019.

After the Chinese sturgeon is released into the Yangtze River, the institute tracks it through a variety of tagging methods, including placing vivo device chips and in vitro fluorescent tagging, plus with the help of the sonar monitoring system covering nearly 1,800 kilometers of the middle and lower reaches of the Yangtze River, said Du Hejun, head of the Species Conservation Technology Section at the Chinese Sturgeon Research Institute.

"Meanwhile, for the first time this year, our institute will track the marine life trajectory of the released sturgeon after it enters the sea through remote sensing satellite technology, in order to better assess the survival status of the sturgeon in the wild," Du added.

"In 2015, we had found wild Chinese sturgeon eggs in the Yichang section of the Yangtze River. We are waiting for the good news," Jiang said.

"I grew up in a city near the Yangtze River and listened to stories of the Chinese sturgeon since my childhood. Now I am studying at the university besides the Yangtze River. My classmates and I often take part in the volunteer activities, trying our best to protect and make our contribution to the ecological environment development of the mother river," Ran Ke, a Tujia nationality student at Three Gorges University, told the Global Times on Saturday.