China's rural industries maintained a sustained and stable development in 2020 with 10.1 million people returning to their hometowns in rural areas to start businesses, which has helped increase farmers' incomes and provided strong support for the decisive battle against poverty and the achievement of an all-round, better-off society, announced China's Ministry of Agriculture and Rural Affairs on Tuesday. 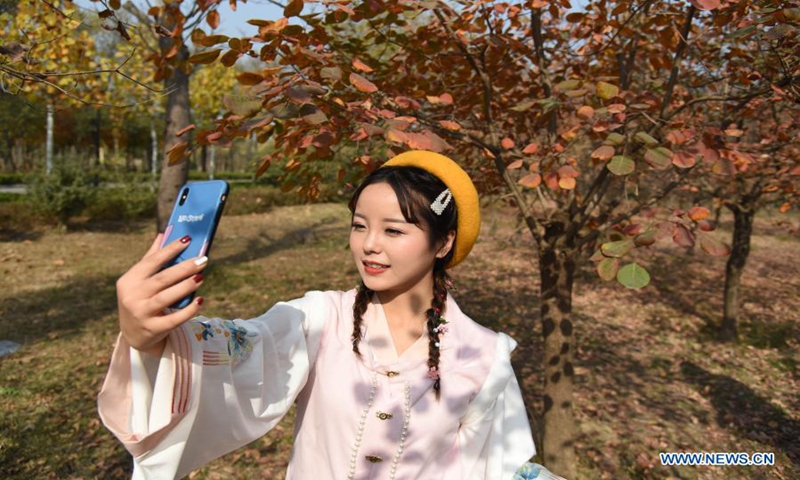 Sun Yan, an online clothes store owner, presents the costume she designed by combining the traditional clothing of the Han ethnic group that is generally called Hanfu via livestreaming, in Sunzhuang Village in East China's Shandong Province, on Nov 10, 2020. (Photo: Xinhua)

It is estimated that around 10.1 million people, 1.6 million more than last year, returned to rural areas to start businesses, creating more than 10 million new jobs. The total number of entrepreneurs and innovation personnel in rural areas also reached 31.5 million.

Over 60 percent of start-up projects have creative factors and more than 85 percent integrate industrial, agriculture and service industries. Moreover, 55 percent adopt new modes such as Internet Plus, promoting the rapid development of livestreaming sales.

The development of characteristic rural industries has accelerated with 34 advantageous and characteristic industrial clusters with an output value over 10 billion yuan being cultivated.

Although countryside tourism was severely impacted in the first half of this year due to the COVID-19 epidemic, it resumed to the perennial level in the second half of this year. With countryside tourism improving employment prospects and significantly increasing incomes, the industry has directly created more than 12 million jobs, with more than 8 million rural households benefiting from the industry.