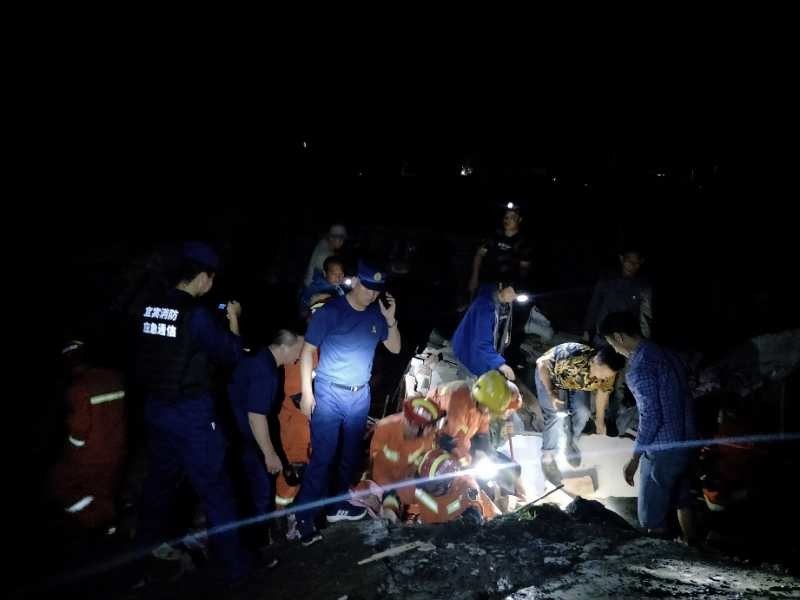 Rescue workers, along with local residents, try to save people buried under the rubble, after an earthquake hit Changning county of Yibin city, Southwest China's Sichuan province, June 18, 2019. (Photo: IC)

CHENGDU -At least 11 people were killed and another 112 were injured in Yibin city, after a 6.0-magnitude earthquake rattled Changning county of Yibin in Southwest China's Sichuan province, at 10:55 pm Monday (Beijing Time), according to local authorities.

The Ministry of Emergency Management has activated an emergency response and sent a work team to the stricken areas to provide guidance in rescue and disaster relief.

The ministry and the National Food and Strategic Reserves Administration have dispatched 5,000 tents, 10,000 folding beds and 20,000 quilts to the quake-hit areas.

Some 302 fire fighters with 63 fire fighting trucks from Sichuan province have rushed to the scene for investigation and rescue, said the ministry.

Four people have been rescued and sent to hospital for treatment, according to a rescuer in Shuanghe township, which is near the epicenter.

"Two people remain trapped, and one of them is in critical condition," the rescuer told Xinhua.

Local residents in Yibin told Xinhua that the quake was quite strong, and that a few tremors were felt in the ensuing half an hour.

"I was resting in my house when the quake struck," said Chen Hongxia, who lives on the 16th floor of a residential building in Changning county. "The chandelier and the furniture in the house were shaking very badly, and my family first hid in the toilet, then rushed to the outside."

Chen said that many of her neighbors rushed to the ground for shelter.

Hu Yukun, also a Changning resident, said that the quake was quite strong, and that "the ground kept shaking for about a minute."

Local policeman He Zexi said that he felt the electric fan in his house shaking at first, before the chandelier began to shake.

In the provincial capital Chengdu, an early warning system alarmed the public about one minute before the earthquake struck. When the countdown ended, the strong tremor was felt.

The provincial department of emergency management has launched an emergency response.

According to the county government, Hongyuan Hotel in Meidong township collapsed during the earthquake.

The quake also caused cracks in a major highway connecting Yibin and Xuyong county of Sichuan's Luzhou city. The highway has been closed. Some sections of two other highways have also been closed. The townships of Meidong and Shuanghe are suffering from poor telecommunications.

Heavy rain is hitting the townships near the epicenter. Local police are trying to evacuate the public to safety. Hospital staff, firemen and other rescuers are rushing to the quake-hit area for rescue efforts.

The quake was felt strongly in the major districts of neighboring Chongqing Municipality, which is not too far from the epicenter, and a few residential houses were damaged, although no casualties have been reported, according to the Chongqing Municipal Emergency Management Bureau.

Changning is a little more than 300 km from Chengdu and about 240 km from Chongqing.

In the neighboring Yunnan province, the earthquake was felt in a few counties of Zhaotong city, which is close to Yibin city. Local fire departments have sent teams to help with rescue efforts.