In a rare move, the international scientists of WHO's SARS-CoV-2 origins tracing mission to China on Wednesday warned that the window for key scientific study is closing due to months-long stalled follow-up work since WHO's March report, stressing the urgency for scientific collaborative study while removing political interference which has focused on the lab leak theory, tried to discredit scientists and drive a wedge among them. 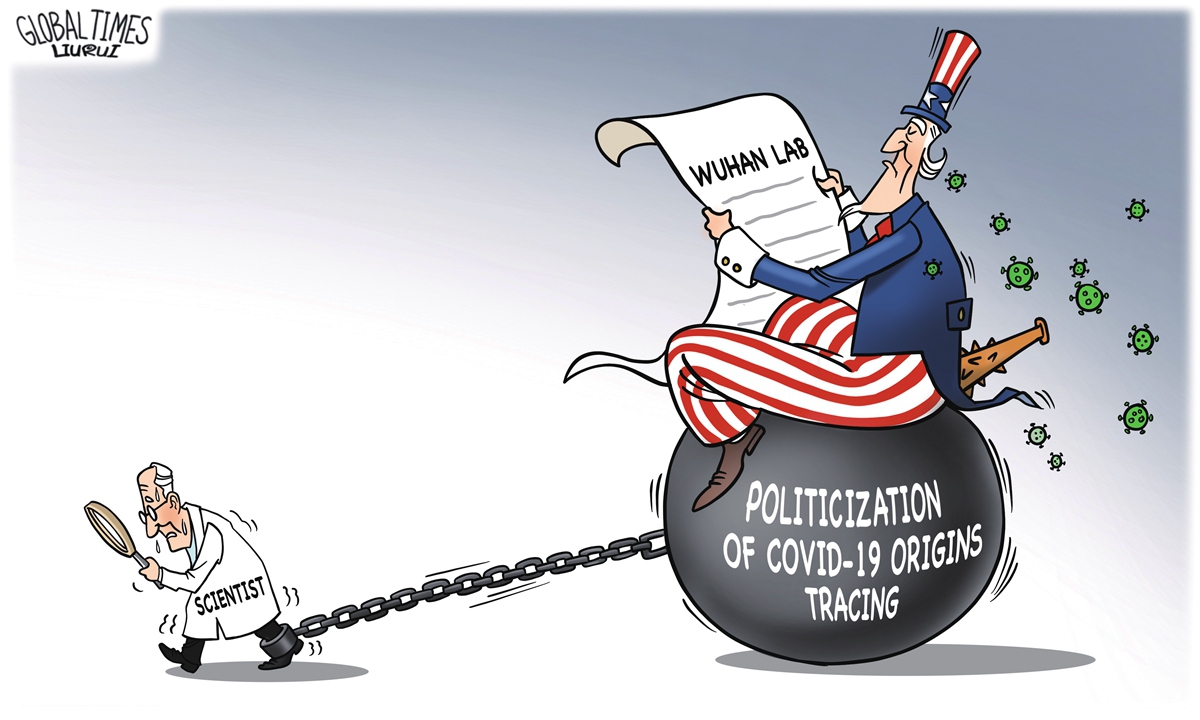 In the most recent paper published in Nature, 11 international scientists including Dutch virologist Marion Koopmans and EcoHealth Alliance president Peter Daszak who undertook a 28-day mission to Wuhan, Central China's Hubei Province in January on the global study of virus origins and completed a WHO report in March, said the March report was "meant to be the first step" in a process that has stalled. It warned the window of opportunity for conducting this crucial inquiry is closing fast, and any delay will render some of the studies biologically impossible. "Understanding the origins of a devastating pandemic is a global priority, grounded in science," the piece said.

Koopmans told the Global Times on Wednesday that the authors of the Nature paper wanted to draw attention to the long delay between the initial work and the start of follow-up studies. "We now are approaching September, and there is no indication of when follow-up work could start. We feel that is taking too long and wanted to express that concern," she said.

In explaining the urgency of the next stage origins tracing work, Koopmans mentioned some time-sensitive studies such as the serological studies to stored blood bank samples collected in the later months of 2019 to identify the earlier pockets of cases.

She said WHO scientists talked to Hubei's blood banks during their stay and agreed to keep the samples, but "we also recommended similar studies in other regions inside and outside of China with early evidence for cases using the same methods, and that has not been arranged and may become impossible," she said.

Another author of the paper who requested anonymity told the Global Times on Wednesday that as time goes by, samples will get misplaced or degraded, people's memories will fade and antibodies will wane, making tracing work harder.

Ever since the scientists completed and released their report of the China mission in March, US-led Western countries have geared up political manipulation to smear China using the "lab leak" theory, which was deemed as extremely unlikely in the report, discredited the report and pressed international scientists to change their natural hypothesis views.

The anonymous author, also a team member of the WHO-China joint study team, said it's clear political messaging and interference have tried to undermine the report's findings, discredit scientists involved, and try to drive a wedge among them.

"We stand united as a team behind the work we did with our colleagues in China. We reaffirm our confidence in the results of our analyses on which pathways are most likely and which are not, and strongly believe in the importance of keeping this work as a scientific collaborative study, and removing political influences," he said.

In the paper, the WHO scientist stated six priorities for follow-up studies to lead from the initial studies in China, highlighting critical trace-back of people and animals in regions inside and outside China that have the earliest evidence for circulation of the virus, and targeted surveys of possible reservoir or intermediate hosts. But it did not include the "lab leak" theory, a sharp contrast with the WHO's next-phase origins-tracing work proposal asking for "audits of laboratories in Wuhan" and Biden's 90-day intelligence report.

Koopmans said that the paper did not include "lab leak" hypothesis as initial work did not provide evidence for involvement of a laboratory, and in the paper, scientists said since the March report, "We have publicly called for any data supporting the lab leak hypothesis to be published and submitted to the WHO. None has, so far."

Liang Wannian, the team leader of the Chinese side of the WHO-convened joint expert team on origins tracing, told a media briefing this month that scientists reached the consensus of "extremely unlikely" after thorough study in Wuhan on the lab leak hypothesis, which should not be included in the next-phase study, considering the conclusions and evidence from the joint report.

In fact, the next-phase study should be carried out in multiple places worldwide covering countries such as where the Chinese horseshoe bat and pangolins reside, nations that lack sufficient testing, places with animal and human being data tested positive for SARS-CoV-2 and who supplied Wuhan Huanan market through cold-chain logistics, Liang said. 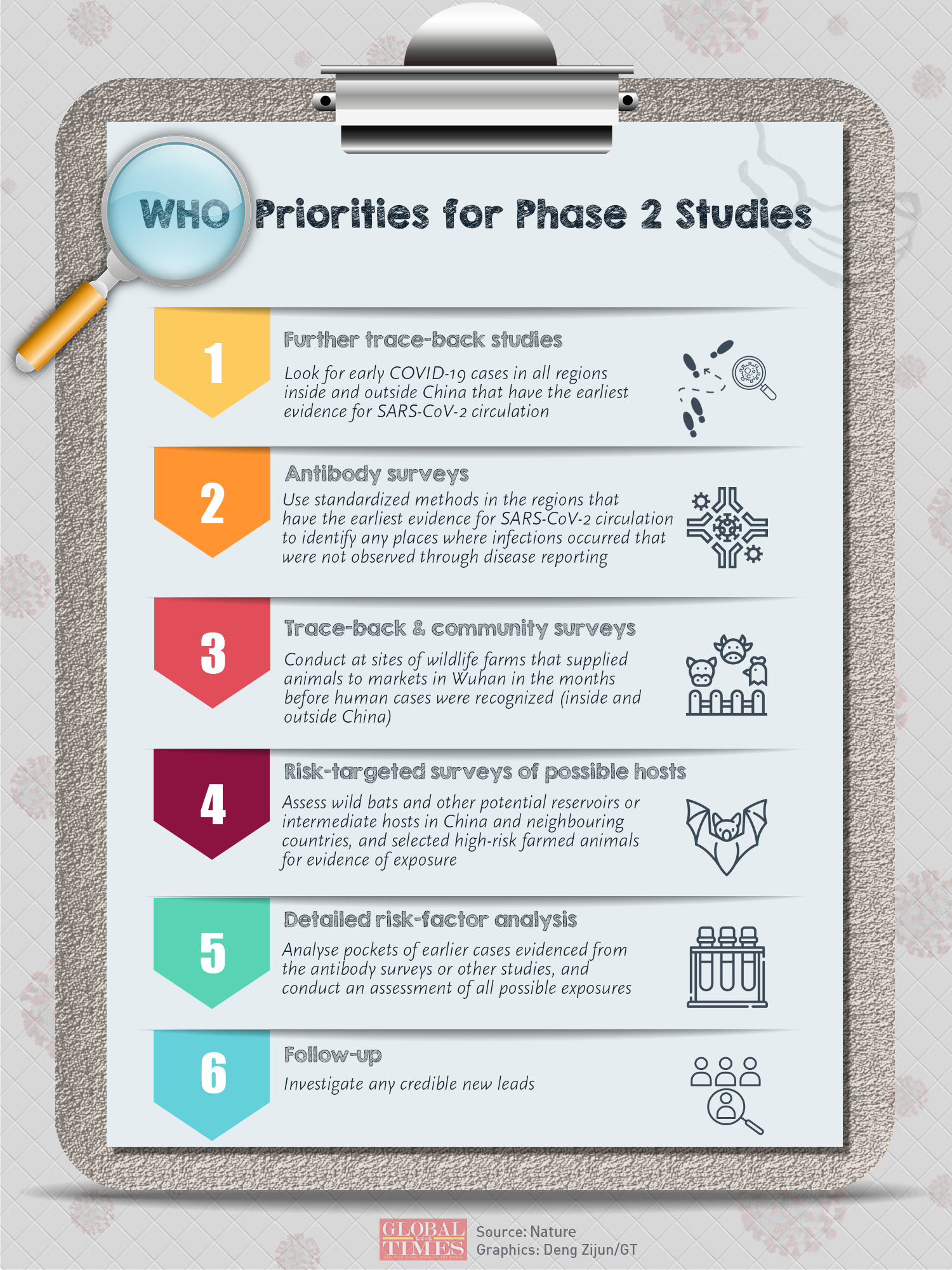