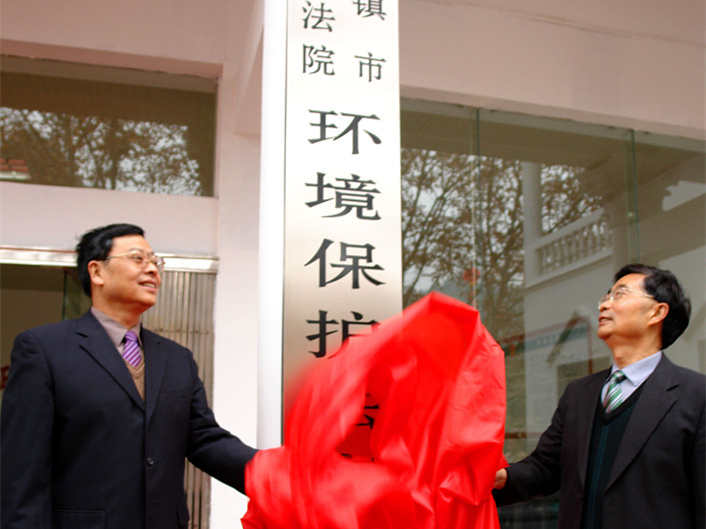 GUIYANG, Nov. 23 (Xinhua) -- Before someone stands trial for felling protected trees in Guiyang, capital of southwest China's Guizhou Province, the defendant or his family can plant new trees to restore the damage.

By doing so, they may receive a more lenient punishment from the environmental court.

In May 2007, the algae bloom in Taihu Lake, one of the largest freshwater lakes in east China's Jiangsu Province, triggered nationwide worries over water pollution.

Six months later, Guizhou set up the special court to better deal with water pollution problems in the province.

"Ecological protection is an issue concerning people's livelihood," said Shu Zigui, head of the People's Court of Qingzhen, with which the environmental tribunal is affiliated. "We want to enhance people's awareness in environmental protection by judicial means."

The first case handled by the special court was filed against a chemical plant for polluting a lake near the city of Guiyang, the provincial capital of Guizhou. The lake was allegedly severely contaminated by waste residue from the chemical plant.

The plant lost the suit and removed the pollution sources shortly thereafter.

According to Shu, the lake has seen a great improvement in water quality. But Shu said he hoped the court can bring more to people.

"The tribunal should work as a seeding machine, planting the idea of environmental protection into people's hearts," he said.

Lang Xueyou was prosecuted for cutting down trees in protected areas in 2007. The special court sentenced Lang to two years in prison with an additional punishment to restore damaged areas of the forest.

The demand to restore the damage appeared frequently in the special court's judgements in the following cases.

"As long as the defendant has made appropriate amends, the special court will show leniency," Shu said. "Besides punishment, the aim of the special court is also to make people aware of the importance of protecting the environment."

To maximize the influence of each case, judges often travel to local villages where the incidents took place to carry out the trials.

"We try to invite as many villagers to the courtroom as we can," Shu said. "Local people can learn about the law from court trials, which can enhance their awareness to protect the environment."

Shu said the trails were also broadcast live on the internet.

Over 1,700 cases were handled by the tribunal over 11 years.

"Severe cases concerning heavy damage to nature are much fewer in recent years," Shu said. "Though, the number of civil lawsuits is increasing rapidly."

"Average people are becoming more active in defending their rights and interests with law, for example, filing suits against noise pollution. I am delighted to see such changes," Shu said.