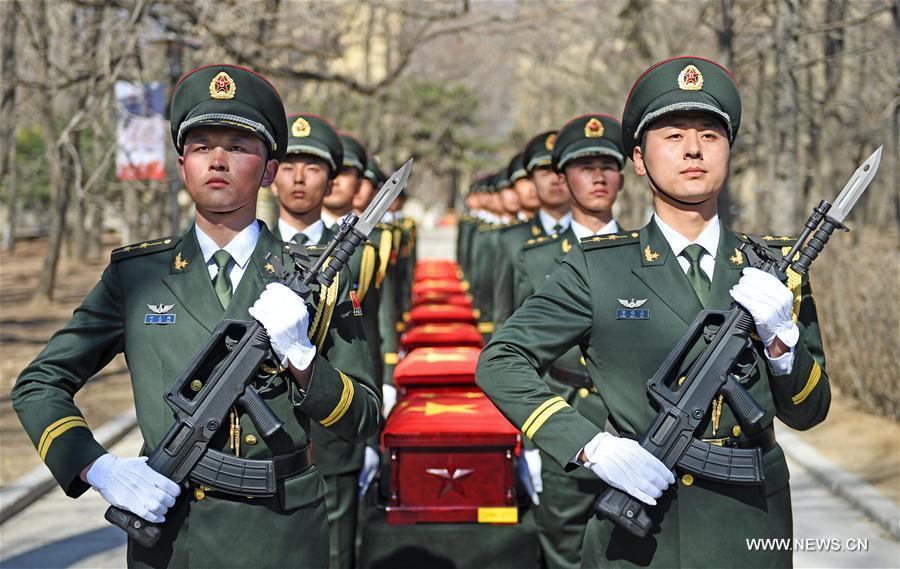 Soldiers escort coffins containing the remains of Chinese soldiers killed in the 1950-53 Korean War during a burial ceremony at the Cemetery of Revolutionary Martyrs in Shenyang, Northeast China's Liaoning province, March 29, 2018. (Photo: Xinhua)

SEOUL - A set of 117 remains of Chinese soldiers killed in the 1950-53 Korean War was casketed in the Republic of Korea (ROK) on Saturday to be sent back to their homeland, Seoul's defense ministry said.

The ceremony to lay the 117 remains in coffins was held at a provisional morgue of the 17th army division of the ROK in Incheon, west of the capital Seoul.

In 2014, the ROK agreed with China to repatriate the remains of fallen Chinese soldiers according to international law and humanitarian spirit, the Seoul ministry said.

The repatriation ceremony is scheduled to be held at the Incheon International Airport on Sunday.

The Chinese People's Volunteers fought alongside the Democratic People's Republic of Korea (DPRK) army in the Korean War against the ROK army and the US-led UN forces between 1950 and 1953.