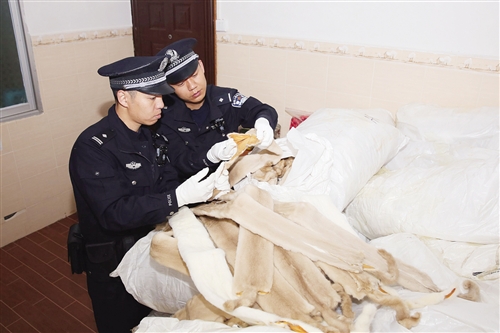 Chinese customs staff and police officers have caught 13 suspects and seized more than 5,200 pieces of smuggled mink fur, local authorities said Saturday.
The joint operation was launched by customs and police from the cities of Nanning, Shenzhen and Shijiazhuang, according to Nanning customs.
The suspects confessed to illegally transporting 185,000 pieces of mink fur, worth around 72 million yuan (11 million U.S. dollars), since July through the China-Vietnam border.

The fur was purchased by Chinese buyers at overseas auctions, the customs said. They were then delivered to provinces including Hebei, claimed as wool or clothes.

The customs said that the gang was suspected of evading tariffs of around 17 million yuan.
High-end mink is usually imported with high duties. This has led smugglers using fake commodity names or to report low prices to evade tariffs, according to the customs.
The customs warned that smuggled animal fur can carry pathogenic micro-organisms, which can spread disease.