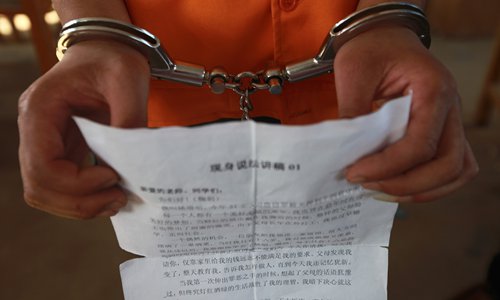 A juvenile delinquent in custody is invited to a middle school in Tangshan, North China's Hebei Province, to tell his story with the aim of preventing juvenile crimes. (Photo: VCG)

The grisly murder and attempted rape of a 10-year-old girl by a 13-year-old boy sparked nationwide shock and fury as Chinese legislators responded by debating the reform of the law governing juvenile crimes.

Police in Dalian, Liaoning Province, said the boy had confessed to stabbing to death of the girl on October 20.

The boy, who lived in the same neighborhood as the victim threw her body under a bush, will not face criminal charges as he is under 14, the public security bureau said on Thursday night.

Police said the boy has been detained for "rehabilitation and reeducation," based on the age of criminal responsibility under the Criminal Law.

The victim's family began searching after she did not return home from her painting class in the afternoon. The body of the girl was found in a bush about 100 meters from her home at 7 pm, covered with two woven bags, financial magazine Caixin reported on its website.

The boy tricked the girl to enter his home with some excuses, police reportedly told the parents, and the forensic examiner found evidence of seven stab wounds, attempted rape and death by excess blood loss.

The murder, and the punishment, enraged Chinese internet users. Many called for the relevant law to be amended so as to lower the age of criminal responsibility. For serious crimes, a more complete juvenile judicial security system was urgently needed, most users appeared to agree.

"It is not scientific to divide criminal responsibility ability according to age," was one typical post by a user on Sina Weibo. "Lots of juveniles now have a more mature mind than their natural age."

Draft amendments to the Law on the Protection of Minors and the Law on the Prevention of Juvenile Delinquency were deliberated at the 14th session of the 13th National People's Congress (NPC) Standing Committee on Saturday.

NPC deputy Fu Yuhang said that the age of criminal responsibility should be lowered to 12.

"This is the opinion of many parents instead of my personal intention," Fu said. "After seeing so many cases like this one, everyone feels anxious."

But some legal experts disagreed, arguing for a sober deliberation of the facts rather than a knee-jerk reaction to a sensational case.

"The Criminal Law is made according to common social phenomena and should not be revised casually for some extreme individual cases," Ruan Qilin, a professor at the China University of Political Science and Law in Beijing, told the Global Times.

Ruan said that the boy should be punished in other ways such as being disciplined by his parents or being sent to a correctional school.

The drafts proposed parents or other guardians of minors shall be directly responsible for a minor's education in crime prevention.

Some Chinese internet users responded to the case by posting a story about Japan's first death sentence for a minor. The murderer was not 18 when he killed and raped a young mother, then killed her 11-month-old daughter.

It took a 10-year appeal process before the killer was finally sentenced to death.