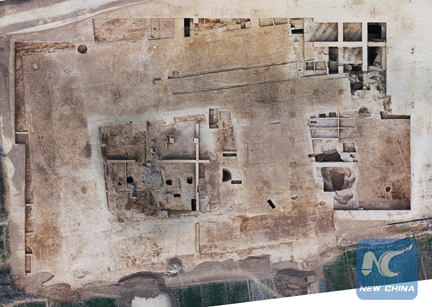 JINAN, July 24 (Xinhua) -- A total of 136 tombs have been unearthed in a cemetery dating back to the Eastern Zhou Dynasty (770-256 B.C.) in east China's Shandong Province, local archeological authorities said Tuesday.

The cemetery is located in Dahan Village of Tengzhou City, according to the provincial cultural heritage and archaeology institute.

Liu Yanchang, a researcher from the institute said that the excavation of the cemetery started in October last year.

So far, 100 small tombs, 36 large and medium-sized tombs, as well as more than 800 items of ceramic, jade, bone and bronzeware have been found.

"Based on the size of the tombs, distribution and number of burial objects, the large and medium-sized tombs might belong to nobles. Their nationalities haven't been identified yet," Liu said.

"The tomb owner with the highest social level that we've found, owned a 40-square-meter chamber and had a plenty of objects in his tomb, including five bodies entombed alive with the owner and three large bronze tripods.

The identity of the tomb owner is currently hard to tell as the tomb was raided before, Liu said.

Archaeologists found the tomb structures, burial customs and shapes and patterns on items unearthed from the tombs featured elements from the culture of ancient Dongyi tribes.

"It proves that states had close relationships and frequent cultural exchanges during this period," Liu said.

Findings in the cemetery can help people understand the formation and development of culture in the region, according to archaeologists.