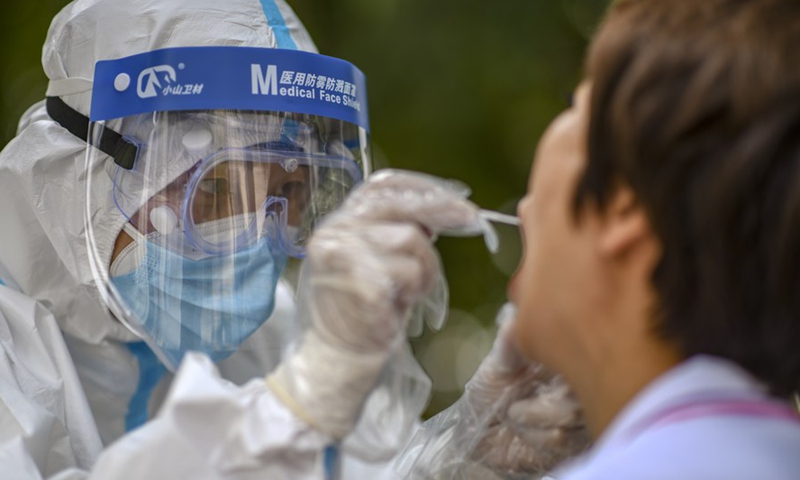 Experts reached by the Global Times warned that such a large number of asymptomatic patients could mean the virus has been spreading among communities. They called for thorough testing and epidemiological investigations to find out more potential COVID-19 patients.

The new outbreak came two months after Xinjiang curbed a cluster of infections in regional capital Urumqi in early August. Kashi is running citywide tests and is hoping to test the entire city population of 4.7 million by Tuesday.

The city conducted nucleic acid tests on 831 employees of the clothing factory where she works, and none tested positive. However, 137 close contacts of the woman's parents did test positive, but they are also asymptomatic.

Zeng Guang, chief epidemiologist of the Chinese Center for Disease Control and Prevention, told the Global Times that the situation looks serious if the small city has detected more than 100 asymptomatic cases in one day. "I believe some of the asymptomatic cases will turn into confirmed cases later on," Zeng said.

"Now the speed of the local testing is very fast. However, as asymptomatic infections are still contagious, and the local patient zero has not been found, the risk of a community cluster infection is very high," Wang Ying, a Shanghai-based immunologist, told the Global Times on Sunday.

"The urgent task now is to study the contact history of 138 people in detail, to learn how the transmission chain formed and find the source. The process can be completed as quickly as a week."

A Level 1 response means the local government is empowered to suspend large gatherings, classes and activities.

A total of 4.7 million people in Kashi prefecture need to be tested, covering all counties and the city of Kashi. The testing in Shufu county was set to be finished by the end of Sunday, and the other areas of the prefecture will complete testing by the end of Tuesday, officials reported at a press briefing on Sunday.

As of Sunday afternoon, over 2.8 million nucleic acid samples had been taken, with 334,800 results released. No abnormalities have been found for the time being.

To meet the target, the region has deployed more than 600 nucleic acid testing personnel from other areas including Aksu and Hotan to support Kashi. Kashi has also formed a testing team of more than 2,500 professionals.

Local doctors and anti-epidemic experts reached by the Global Times said that Kashi is working against the clock to conduct nucleic acid tests for residents in communities and in schools and companies.

The National Health Commission has dispatched a working team to Kashi to guide the city in dealing with the latest COVID-19 alert.

Local residents told the Global Times that Kashi is not under a full lockdown as some online rumors have claimed, but it has still been affected due to the alert. Officials confirmed the information on late Sunday.

Those who come to Kashi do not need to be quarantined, but they do need to provide a negative test report for COVID-19. Those wishing to leave the city can do so as long as they have a negative nucleic acid test report valid for seven days.

Some local communities in Kashi are under close-loop management, residents said. Classes at all primary and secondary schools and kindergartens are suspended until October 30. Stores in the city will be open as usual to ensure sufficient daily supplies, according to the Kashi local anti-epidemic group.

People traveling from Kashi and the Kizilsu Kirgiz autonomous prefectures to Urumqi airport need to be quarantined, the Global Times learned from the airport working group of the Urumqi epidemic prevention and control headquarters on Sunday.

On arrival, they will be picked up by buses and taken to designated hotels for nucleic acid testing. Passengers from other places or those leaving Urumqi do not have to be quarantined and tested.

The Global Times reporter learned that compared to the outbreak in Urumqi in August, Kashi acted fast on reporting result of the epidemiological survey, it also swiftly adopted strict measures to seal off residential compounds.

Residents in Urumqi took to the internet to complain when they were trapped in a strict 40-daylockdown, which caused inconvenience to their lives.

Xinjiang must make every effort to control regional cases and widespread nucleic acid testing in Kashi will be carried out, Chen Quanguo, the Party secretary of the region and head of Xinjiang's anti-epidemic group, said at a video conference Saturday.

Zhang Wenhong, a prominent Chinese infectious disease expert said that China's virus prevention goal is never to achieve a zero caseload. Thus observers said Xinjiang's local governance will be put to the test on whether it could manage to stanch the spread of the virus via scientific and precise control modes, like those employed during previous outbreaks in Beijing and Dalian.

Kashi is learning from Qingdao's experience, where 10 million people were tested in just five days. The mass testing rollout will help track more potential carriers, Zhang Yuexin, a medical expert who is part of Xinjiang's anti-epidemic group, told the Global Times on Sunday.

The total of 138 asymptomatic patients could mean the virus being spread among local communities, Zhang said. He is now heading to Kashi to investigate the outbreak.

Although Kashi is in a remote region in Xinjiang where medical resources are relatively weak, it also has the capability to achieve the target of citywide tests, Zhang said.

In Kashi, people share the habit of close social gathering, which Zhang said may boost virus transmissions among all walks of life, while he dismissed claims that citywide testing is an over-reaction and waste of resources. "Citywide tests will help track more potential infections among communities," he said.

A Beijing-based immunological expert who asked for anonymity said they expect the number of people infected locally may be higher.

"Given the current scale of 138 infected people, it is very likely that the virus has spread for more than one generation. If the basic reproduction number, or R value, for COVID-19 is at 3.7 and the incubation period is five days, the virus should have been circulating locally for about 15 days. Further testing is needed to uncover more potentially infected people," the expert said.

"It is unlikely caused by virus mutation there, given local temperature and climate condition," the expert added.

Chinese net users swarmed online to express their worries after the new outbreak in Kashi, but overall there is a positive attitude toward the handling of the outbreak.

After late Saturday night notification of the silent virus carrier, residents and tourists in the region were notified overnight that they should be tested. Lines of people were seen in Kashi waiting to be tested at night, online pictures showed.

"I was told by the staff at my hotel to take a nucleic acid test at midnight. My plans may have to be altered," said one tourist surnamed Yang, who is now trapped in Kashi. The Global Times learned that many domestic tourists like Yang will have to reschedule their travel plans due to the semi-lockdown measures.

An Urumqi resident who has just returned from a business trip to Kashi told the Global Times that he was tested on Saturday night and had the result by Sunday morning. He said his employer has organized him and his colleagues to quarantine in an Urumqi hotel for 14 days.

As a preventive measure, Chinese cities including Beijing and Shulan in Northeast China's Jilin Province issued travel alerts involving Kashi. Shulan ordered people who had been to Kashi since October 10 to immediately report to local communities and be quarantined for 14 days.

All residential communities, villages and towns in Shufu county have organized groups to disinfect sites where the asymptomatic patients and their close contacts have been, and to a radius of 10 kilometers around those sites.