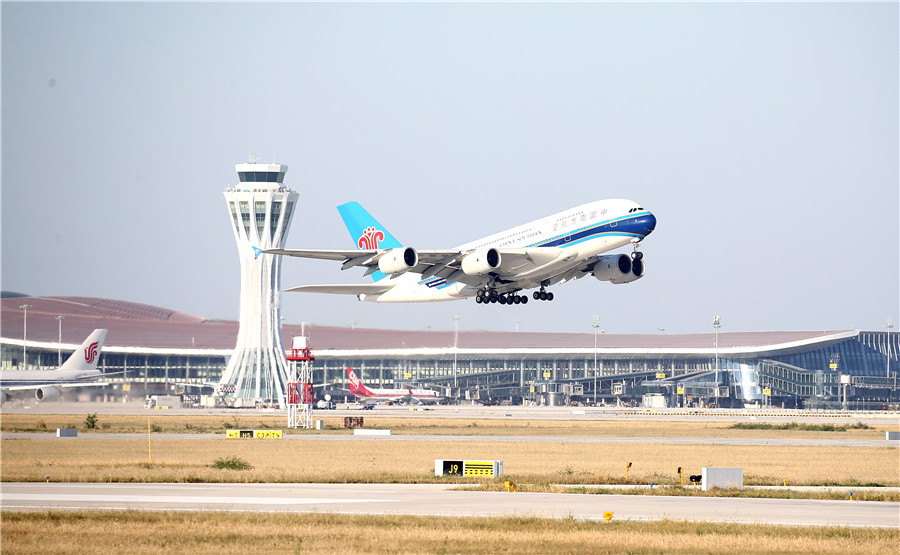 Seven domestic and eight overseas airlines will begin operating flights out of Beijing Daxing International Airport from Sunday, according to the airport authority.

"So far, nearly 70 airlines have expressed their willingness to have their operations in Daxing airport, including more than 50 overseas carriers," said Pang Zhilin, director of the aviation product planning department at the airport.

With more airlines operating at both the new airport and Beijing Capital International Airport, airport authorities will step up efforts to prevent passengers from going to the wrong airport.

Passengers who go to the wrong airport can pick up a "missing passenger" label at the check-in counters and taxi, airport bus and subway service counters. They can also get a card with instructions telling them how to get to the right airport.

Ground staff at both airports will guide the lost passengers to the fast transit channel, with multiple means of transportation available.

Passengers who travel frequently to Daxing airport by subway can also enjoy discounted subway tickets. They can buy a month-pass with 45 trips for 550 yuan ($77.80), 30 trips for 470 yuan and 20 trips for 385 yuan. The regular one-way ticket price is 35 yuan.

The 41.4-kilometer subway connecting Caoqiao subway station in Fengtai district with Daxing airport runs at a top speed of 160 kilometers per hour, much faster than the 90 km/h limit on the Airport Express line to Beijing Capital International Airport.