CHINA 15 confirmed on board bus plunging into river

15 confirmed on board bus plunging into river CHONGQING, Oct. 29 (Xinhua) -- Fifteen people were confirmed to have been on a bus that plunged into the Yangtze River in southwest China's Chongqing Municipality on Sunday, local authorities said Monday.

The bus veered onto the wrong side of the road and collided into an oncoming private car before breaking through road fencing and flying off a bridge in Wanzhou District at 10:08 a.m. Sunday.

An initial police investigation found that 15 people, including the bus driver, were on the bus at the time of the accident, rescue headquarters said.

Two bodies have been retrieved from the river so far, but their identities are not yet known. Medical staff have taken DNA samples from families of the missing people for identity verification, according to rescue headquarters.

Rescue work is still ongoing. Over 1,000 rescuers with 48 rescue boats recently arrived to carry out salvage operations. The Ministry of Transport dispatched five professional deep divers to Chongqing Sunday night and their equipment is expected to arrive Monday evening.

With the help of a sonar system, professional rescue ships located an 11-meter-long and three-meter-wide object on the river bottom and it was believed that it is the sunken bus. 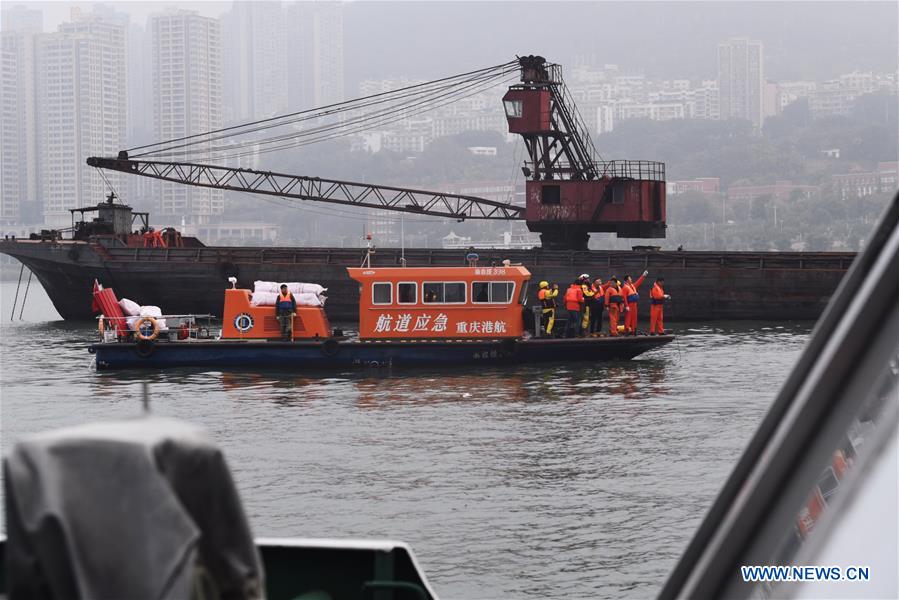 The complex water situations and deep water in the river have complicated the rescue efforts.

A police officer on duty Sunday said the sinking spot of the bus happened to be the deepest area in the river. Based on on-site technical analysis, rescuers estimated that the bus sank about 68 meters under water.

Local authorities are further investigating the cause of the accident.

According to a preliminary investigation, the bus crossed over the line marking the center of the bridge and crashed into the car that was driving normally on the other side.

The bridge, named the Second Yangtze River Bridge of Wanzhou, is a two-way, four-lane bridge with an overall width of 20 meters. Xinhua reporters saw that the fence breach is at the middle of the bridge.

The bus was No. 22 from Jiangnan New District of Wanzhou to Beibin Road.

Top photo taken on Oct 29, 2018 shows rescuers working at the accident site in Wanzhou district, Southwest China's Chongqing. Two bodies have been retrieved from the river after the bus broke through road fencing and drove off a bridge at around 10 am Sunday in Wanzhou district. Surveillance cameras show more than 10 people, including the driver, were on the bus when the accident occurred. Rescue work and further investigation into the cause of the accident are ongoing.[Photo/Xinhua]