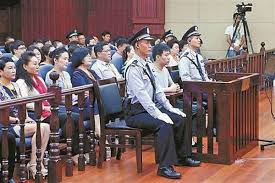 A total of 15 gang members were sentenced to prison for two to 25 years on Friday for multiple gang-related crimes in east China's Shandong Province.

Wu Xuezhan was sentenced to 25 years in prison for organizing and leading gang crimes, according to the Dongchangfu District People's Court in Liaocheng.

Since 2010, Wu has organized the other defendants to conduct gang-related offenses, such as violently collecting debts, according to the court.

The gang drew public attention in April 2016 when Yu Huan, 22, injured some of the gang members after he and his mother were beaten and insulted.

Yu was sentenced to life imprisonment in February 2017 by the Intermediate People's Court of Liaocheng after he stabbed a debt collector to death in defense and injured three others, two seriously.