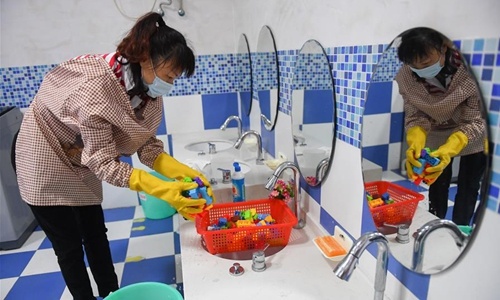 16 children at a kindergarten in Dahua Yao Autonomous County, Hechi, South China's Guangxi Zhuang Autonomous Region, were reportedly suffering from vomiting and stomachache-inducing symptoms on Wednesday, and samples taken from them were found to have contained norovirus, the Guangxi-based Nanguo Morning Paper reported on Thursday.

Parents took their sick kids to the hospital overnight on Wednesday, and there were still four children in the hospital receiving further medical treatment as of Thursday morning, said the report.

One parent told the media that his 5-year-old child had vomited several times and suffered from stomachache-inducing symptoms after school on Wednesday. "After only a short pause, they would vomit again and would vomit even while drinking water," the parent said, noting that several children had similar symptoms.

At 12 pm on Thursday, the person in charge of the center for disease control of Dahua Yao Autonomous County said staff members have found norovirus in the children's samples, according to the report.

The CDC staff members took samples from the kindergarten for further investigation. The school was also required to suspend classes for three days and a comprehensive disinfection in the school was required.

All of the 16 children with similar symptoms were from a senior grade of Dahua Xilongwan Kindergarten, according to the report, citing kindergarten director Wei, who added the school supplies food to all classes but no evidence showed the incident was caused by food poisoning.

The Global Times reached the local center for disease control in Hechi on Thursday afternoon, with one staff member saying they have a report of suspected food poisoning involving the 16 kindergarten children, but they had not yet confirmed the report related to the norovirus.

The local hospital that treated the children had no other detailed information about the incident when reached by the Global Times on Thursday.