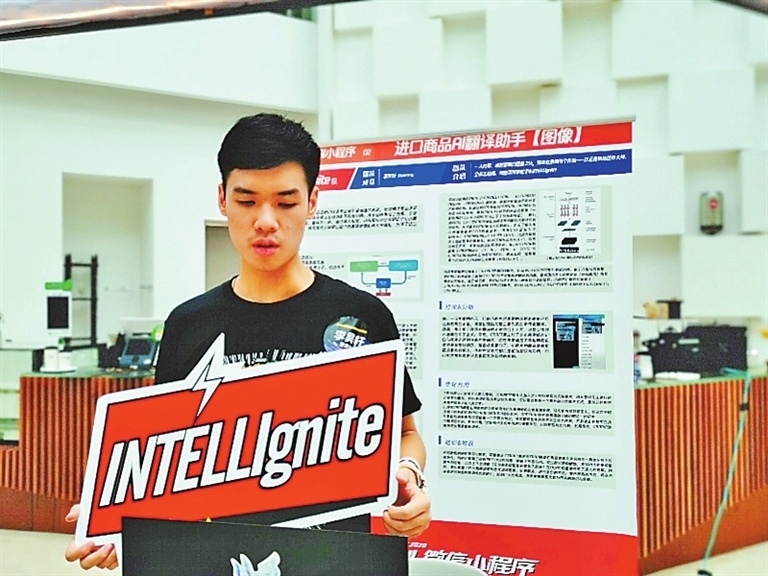 Li, among 20 students who stood out at the roadshow, also received an internship offer from Tencent.

The roadshow was part of the WeChat Miniprogram Future Camp, which was hosted by Tencent Sci-Tech Academy for Youth and was jointly initiated by the academy and WeGeek. The roadshow and the closing ceremony of the camp were held in Shenzhen over the weekend.

According to Li, the miniprogram was designed for his grandfather and is aimed at helping middle-aged and elderly people accurately identify items when they buy goods from overseas.

Li said that although WeChat has the “scan and translate” function, traditional optical character recognition (OCR) can only recognize horizontal text, and has restrictions on the length of words.

“The instructions, trademarks and slogans of imported goods are inclined, twisted and rotated. The names of some imported food and medicines are exceptionally long, so it is difficult to translate these names by OCR. My miniprogram solves these problems with new models, algorithms and networks,” the 17-year-old told the Daily.

It is reported that Tencent has discovered a number of teenagers who have shown great interest in science and technology through the future camp and will customize training programs for them.

Statistics show that in the first phase of the camp, a total of 20 students received Tencent’s internship offer. Among them, the youngest is only 13 years old and the oldest is 19 years old.

The camp was officially launched May 18, attracting more than 1,300 teenagers from more than 300 middle schools around the world.

In the activity, students were required to complete AI tasks by themselves, fulfill guided AI challenges and integrate product creativity to complete the AI miniprogram.