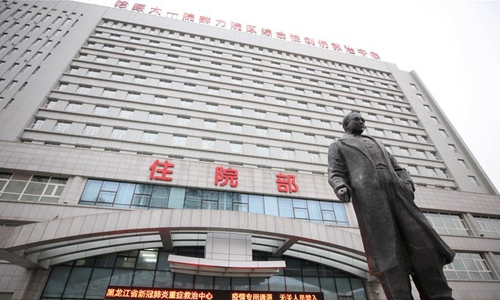 Eighteen party officials and public officials were held accountable for failing to conduct anti-epidemic work in Harbin including deputy mayor, director of Harbin Health Commission according to a notice issued by the Heilongjiang Provincial Commission for Discipline Inspection on Friday.

Harbin has had 26 new confirmed cases and 19 asymptomatic infections since April 9. Before that, the province had reported zero domestic infections for 29 consecutive days.

We will deeply reflect on the lessons learned from Harbin, strictly investigate and rectify loopholes, and mobilize the province's efforts to prevent the cross-border import of the epidemic, so as to resolutely curb the rebound and spread of the epidemic in key areas, Zhang said in the conference.

Harbin will not have a serious epidemic as Heilongjiang Province rapidly responded with stricter epidemic control measures and is making an all-out effort, a local public health expert told the Global Times on Friday, speaking on condition of anonymity.

Heilongjiang has adopted stricter epidemic prevention measures, saying it will investigate the responsibility of relevant units and persons.

Secondary and higher-level medical institutions in Heilongjiang will carry out nucleic acid and serum antibody tests for all hospitalized patients and caring personnel, and untested people are not allowed to be hospitalized or be transferred from Thursday, according to the Xinhua News Agency.

Most of the existing cases are related to imported cases, which can be traced back to the sources. Infections of medical staff show that the nosocomial infection controls are not in place. These infections with a clear cause are relatively easy to control, the expert said.

The most important and difficult thing is to appeal to the public to maintain a high level of personal epidemic awareness for long periods, he noted, adding that insisting on wearing masks, washing hands, reducing gatherings and measuring temperatures for long periods are hard steps to follow but they are key to prevent clustered infections.

The nosocomial infection occurred in The First Hospital affiliated with Harbin Medical University and The Second Hospital of Harbin, according to a press conference on epidemic work in Heilongjiang on Thursday.

After the confirmed COVID-19 cases were found in these two hospitals, the wards where these cases occurred were immediately emptied, and the patients were transferred to other wards for single isolation treatment. The original ward was closed after disinfection.

The loopholes and shortcomings of anti-epidemic work, leading to the cases of cluster infection and nosocomial infection in Harbin, must be thoroughly investigated. We will resolutely contain the rebound and spread of the epidemic, and never allow it to ruin the national efforts against COVID-19, Wang Wentao, the governor of Heilongjiang Province, said during a video conference on local epidemic control work Thursday night.

Residents of Harbin are encouraged to take nucleic acid and serum antibody tests at their own expense and at an affordable cost, so as to achieve early detection, early reporting, early isolation and early treatment, according to Wang.

The senior-year students of junior high schools in Harbin were originally supposed to return to school on Friday. However, that will be delayed further due to the current situation of the epidemic, according to the Heilongjiang Province People's Government.