The 19th Central Committee of the Communist Party of China (CPC) concluded its fourth plenary session in Beijing on Thursday with the release of a communique.

The plenary session heard and discussed a work report delivered by Xi, who was entrusted by the Political Bureau of the CPC Central Committee, according to the communique.

The session reviewed and adopted the CPC Central Committee's decision on some major issues concerning how to uphold and improve the system of socialism with Chinese characteristics and advance the modernization of China's system and capacity for governance. Xi explained the draft document to the plenary session.

The session fully affirmed the work of the Political Bureau of the CPC Central Committee since the Third Plenary Session of the 19th CPC Central Committee, acknowledging its endeavors that led to major achievements in various causes of the Party and the country despite complicated situations marked by increasing risks and challenges at home and abroad.

Speaking of the overall goals to be met, the meeting vowed to see that institutions in all fields are notably improved when the CPC marks its centenary, before the modernization of China's system and capacity for governance is basically achieved by 2035 and realized in full as the People's Republic of China celebrates its centenary.

The communique said, as proven by practice, the system of socialism with Chinese characteristics and China's system of governance are systems of strong vitality and huge strength.

These systems are able to push for the continuous progress of the country with nearly 1.4 billion people and ensure the realization of the two centenary goals toward the rejuvenation of the Chinese nation, which has a civilization of more than 5,000 years, it added.

The session stressed that it is a major strategic task of the Party to stick to and improve socialism with Chinese characteristics, push forward the modernization of the national governing system and capability.

The session urged the CPC committees and governments of all levels to take a lead in safeguarding the authority of the system.

The meeting also stressed the importance of theory studies and education, so that the whole nation would know more about the features and advantages of socialism and be more confident in it.

'One Country, Two systems' is a fundamental measure to ensure national unification

The session proposed that the "One Country, Two systems" policy, as a fundamental and significant measure to ensure national peace and unity, should be strictly reinforced. According to the communique, the Hong Kong Special Administrative Region and the Macao Special Administrative Region must be governed in strict accordance with the Constitution and the Basic Law, so as to safeguard prosperity and stability in the regions as well as establish well-rounded law enforcement mechanisms.

The communique also said the central committee will advance the process of peaceful national reunification and promote cross-Strait relations.

The session agreed to work with Taiwan compatriots to step up economic, cultural and people-to-people exchanges between the two sides, and firmly oppose any separatist activities by "Taiwan independence" separatist forces. 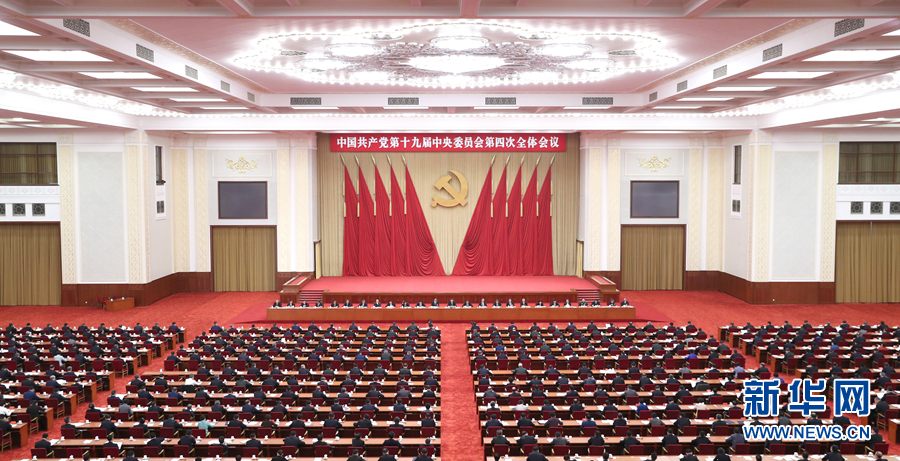 The 4th Plenary Session of the 19th Central Committee of the Communist Party of China (CPC) is held in Beijing from October 28 to 31, 2019. (Photo: Xinhua)

Stay committed to the independent foreign policy of peace, working to build a community with a shared future for mankind

The session pointed out we should improve the institutions and mechanisms for upholding Party leadership in foreign affairs, constantly deepen and improve our diplomatic layout, promote the construction of system that work together for mutually beneficial results, and stay actively engaged in reforming and developing the global governance system.

Improve welfare system for all

Increasing welfare for Chinese people and promoting the all-round development of the people is the essential requirement of building a party for the public, which exercises state power for the people.

We must strive to meet people's diverse demand at different levels, and see to that the gains of reform and development benefit all people in a fair way, said the communique.

Meanwhile, China also needs to improve its social security and welfare system that can cover all Chinese people, and strengthen the institutional guarantee for improving people's health.

We also must win the battle against poverty, said the communique, and build a long-term mechanism that can solve relative poverty.

Adhering to and improving the basic economic system

We should give full play to the initiative of both the central and local authorities on the precondition of upholding state ownership, said the communique.

The communique further pointed out that China must adhere to the socialist economic system, fully play out the decisive role of market in resource allocations, and also let the government play its role better.

China will continue to fully implement the new development concept, adhering to the supply-side structural reform as the main line, and accelerate the construction of a modern economic system.

According to the communique, we must unswervingly consolidate and develop the public economy, and unwaveringly encourage, support and guide the development of the non-public sector, and stimulate its dynamism and creativity.

Meanwhile, China will continue to adhere to the distribution system whereby distribution according to labor is dominant and a variety of other modes of distribution exist alongside it.

China will speed up the paces in improving socialist market economy, improving technological innovation mechanism, so that the country can build a new economic system with a higher level of openness.

The communique pointed out that ecological civilization construction is a major task for the sustainable development of China.

The concept of "green mountains and clear water are equal to mountains of gold and silver" must be practiced, and resource conservation and environmental protection should be adhered to as two basic state policies.

The plenary session also reviewed the report on the CPC Central Commission for Discipline Inspection on Liu Shiyu's, former deputy Party chief of the All China Federation of Supply and Marketing Cooperatives (ACFSMC), serious violations of Party discipline and laws, confirming that he was placed on probation within the Party for two years.

China will continue to improve socialism with Chinese characteristics and the mordernization of the national governing system and capability, experts said on Tuesday.

According to Xue Lan, public policy professor of Tsinghua University, it is important for China to stick to the goal of bettering socialism with Chinese characteristics.

Xue further elaborated on the relationship between the mechanism of governing a country and actual governance capability.

"These two have been previously mentioned by General Secretary (of the CPC Central Committee) Xi Jinping. They are connected; only with a great mechanism can the capability of governing this country be improved.”

Zhang Liqun, director of the Development Research Center of the State Council, echoed Xue's remarks, stressing that the improving process is "a vital mission that has lasted for decades."