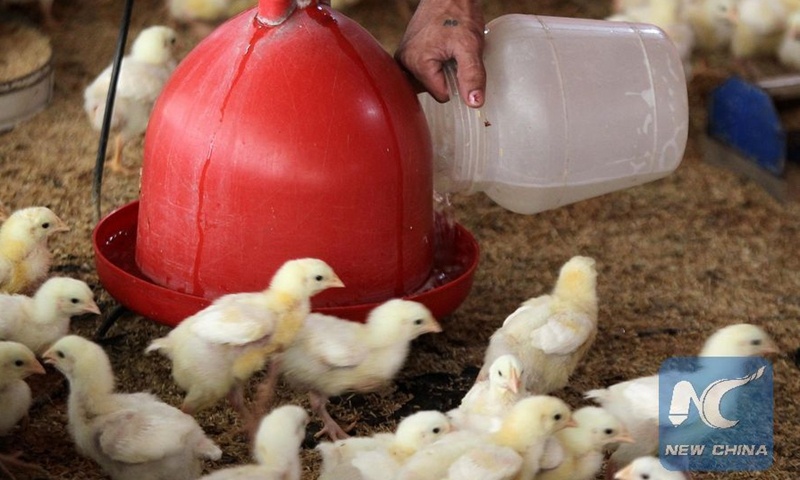 The H5N8 strain of bird flu has been detected in seven workers at a poultry farm in Russia, the first time it has been found in humans, according to media reports. Chinese experts said although it may not become a black swan event, the discovery is a warning for countries that reported outbreaks of the strain. And they advised these countries to set up appropriate mechanisms to prevent inter-species transmission.

Human-to-human transmission of the novel bird flu virus has not been registered yet, Tass quoted a Russian official as saying on Sunday.

All seven infected people are in good health and have only mild symptoms, said the official.

Yang Zhanqiu, deputy director of the pathogen biology department at Wuhan University, said on Sunday that the pathogenicity of avian influenza seems not to be high judging by the current mild condition of the patients, which indicates the H5N8 bird flu outbreak is not that risky.

Zhu Yi, an associate professor at China Agricultural University in Beijing, believes that the discovery that the new strain has passed from birds to human might not become a black swan event, at most a "gray rhino event." Gray rhinos usually refer to non-random events which occur after a series of warnings and visible evidence.

"Humans have more experience in dealing with bird flu and tend to get the upper hand in the battle against the disease," Zhu said.

The H5N8 strain of bird flu has been found in Europe, South Asia, East Asia, the Middle East and North Africa in recent months, with no detected cases of human infection until the Russian report.

Russian scientists found the new strain of bird flu at a poultry farm in southern Russian, where an outbreak in the bird population was recorded in December 2020, Tass reported.

However, both Chinese experts pointed out that the possibility of human-to-human transmission cannot be ruled out if the virus mutates.

The Russian official was quoted in the report that "time will tell how soon subsequent mutations will allow it to cross this [human-to-human] barrier."

Zhu said the inter-species transmission should sound an alarm to the world, especially the countries where bird flu outbreaks have happened, and that mechanisms should be established to prevent the virus from passing from wild birds to poultry and then to humans.

"It would be an even more horrible disaster than COVID-19 if the novel bird flu is found to be transmitting between humans," Yang also said.

The mortality rate of human infections with the highly pathogenic avian influenza can reach 40 percent, though it has rarely happened around the world, said the virologist.

China reported cases of the H5N8 bird flu among wild birds in at least four places in the last three months, causing the death of more than 50 birds, mostly wild swans.

The highly pathogenic avian influenza viruses are mainly transmitted through physical contact with infected poultry, their secretions and excrement, and it could also cause infections via respiratory and digestive tracts. Wild birds are easily cross-infected during migration.