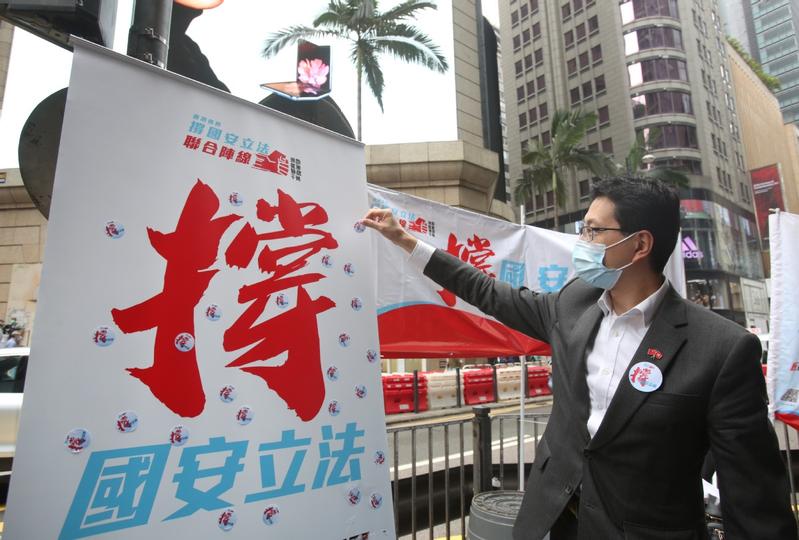 Stanley Ng Chau-pei, a Hong Kong deputy to the National People's Congress shows his support of the national security legislation after signed a petition at a street stand in Hong Kong Special Administrative Region, May 29, 2020. (File photo: China Daily)

More than 2,600 Hong Kong celebrities and 110 arts and culture groups in the city voiced their support for the proposed national security law for Hong Kong on Friday.

In a star-studded statement, martial-arts movie star Jackie Chan, singer Alan Tam Wing-lun, actor Eric Tsang Chi-wai, actress Kara Wai Ying-hung, and many others said they agree with the pressing need to enact such a law.

The 100 groups included the 170-member Hong Kong Motion Picture Industry Association; the Association of Chinese Culture of Hong Kong, which has over 150,000 members; the Chinese Photographic of Hong Kong; and Hong Kong Dance Federation.

They said they support the decision by the National People's Congress, the country's top legislature, to authorize its Standing Committee to draft the law, which criminalizes secession, subversion, terrorism and foreign intervention.

The law will hopefully plug the national security loophole while ensuring a stable environment and ample room for arts, they said.

They asked for more promotion of the legislation by relevant authorities to ease the public concerns, while calling for society at large to reach consensus, so Hong Kong can start afresh.