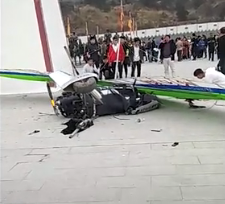 The accident happened at about 10 a.m. when the delta wing glider owned by a local tourism company crashed during a pilot flight, according to the township government of Jiangwan in Wuyuan County, a tourist attraction.

Both victims were employees of the company. An investigation is underway.