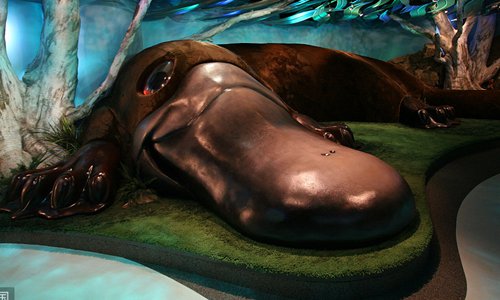 A Giant platypus is seen at Australian Pavilion during the press day of the Aich Expo 2005 on March 18, 2005 in Nagakute, Japan. (Photo: VCG)

Two marine reptile fossils with similar predation patterns to the current platypus were discovered for the first time in Central China, which is of great significance for studying the formation process of modern marine ecosystems.The two fossils are of a kind of marine reptiles called the Eretmorhipis carrolldongi, which lived in the early Triassic period some 248 million years ago. They have similar predation patterns to the current platypus, which means they may prey on shrimps or other mollusks at dusk or night, the China Geological Survey (CGS) under the Ministry of Natural Resources announced on Monday. This is the earliest fossil on record discovered that reveals non-visual sense predation method in tetrapods, researchers said.The discovery indicated that the marine ecosystem had already been restored about 248 million years ago after a mass extinction at the end of the Permian period, while the mainstream believed that it was not restored until 242 million years ago.The fossils were discovered by a research team at the CGS Wuhan Center. The team had discovered a large number of rare marine reptile fossils in recent years, including seven new genera.The platypus is one of the most primitive mammals in the world. It first appeared 25 million years ago and now only lives in Australia. The platypus looks for prey through a unique soft mouth in a dimly lit environment rather than by eyes, according to CGS.