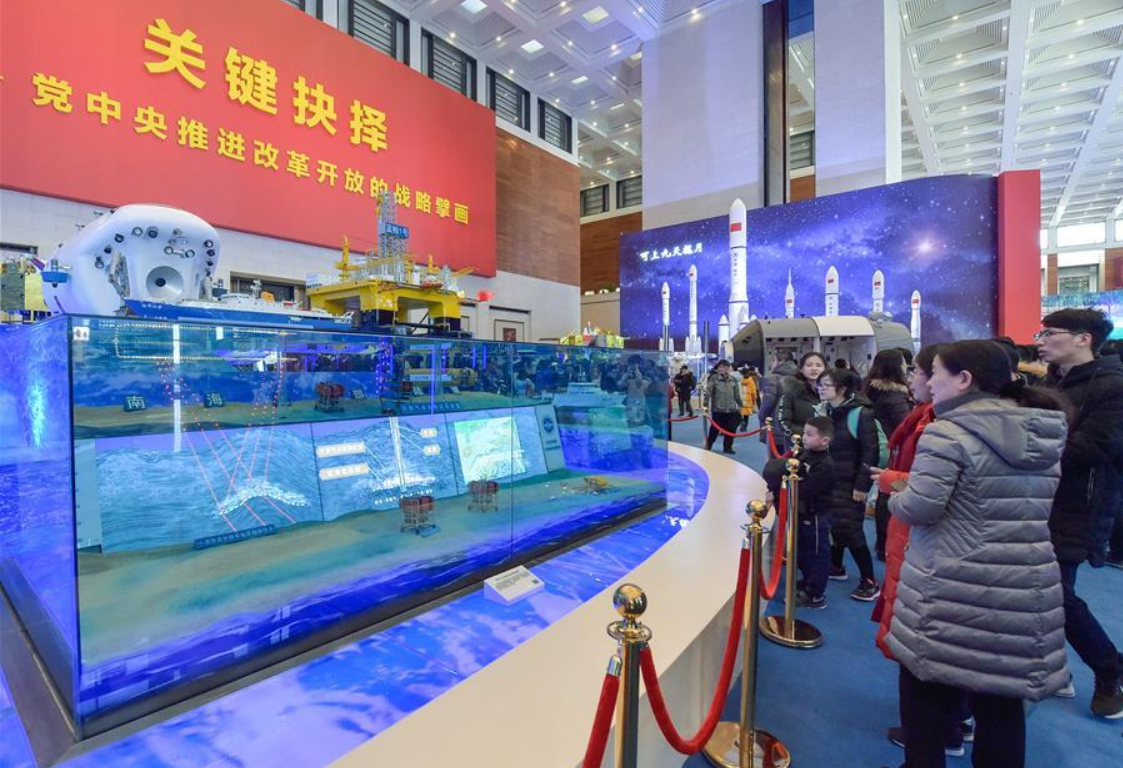 People visit a major exhibition to commemorate the 40th anniversary of China's reform and opening-up at the National Museum of China in Beijing, capital of China, Dec. 25, 2018. (Photo: Xinhua)

BEIJING, Dec. 29 (Xinhua) -- How best to describe 2018 in China? A nationwide survey showed most respondents chose "Fen" and "Gai Ge Kai Fang 40 Nian" as the Chinese Character and Word of the Year 2018 in China.

"Striving" and "the 40th anniversary of reform and opening-up," as the keywords mean, were chosen from among several thousand recommendations and based on hundreds of thousands of votes by netizens in an annual poll organized by the Chinese National Language Monitoring and Research Center.

Held for the 13 consecutive years, the survey also chose "exit" and "trade friction" as the international character and word of the year, respectively.

A review of China's achievements against headwinds in 2018 would justify the selected words: it has been a year of milestones and profound endeavors for the world's second-largest economy in opening up wider.

A GOOD WAY TO CELEBRATE

This year, China commemorates the 40th anniversary of its reform and opening-up with concrete actions and pledges to further open up, providing more chances for the world to share its growth dividends.

The country has unveiled measures to broaden market access, improve the investment environment, increase imports, and build new ground in opening up.

Opening-up has revved up in the finance sector: China launched the trading of crude oil futures contracts in Shanghai, the first futures contracts listed on China's mainland to overseas investors; foreign firms have been offered the green light to have 51-percent ownership of their brokerage ventures; foreign investment access was also eased in the insurance industry, just to name a few.

UBS AG became the first global financial institution to take advantage of the country's new rules to gain a majority stake in its mainland securities joint venture, raising its stake in UBS Securities Co. to 51 percent from the current 24.99 percent.

To boost imports, the country has cut tariffs for an array of products including automobiles, consumer products and medicine this year, lowering the overall tariff rate on imported goods from 9.8 percent last year to 7.5 percent.

A total of 172 countries, regions and international organizations, and more than 3,600 enterprises participated in the first China International Import Expo, which was held from Nov. 5 to 10 in Shanghai. It was the world's first import-themed national-level expo.

Also in 2018, the landscape of China's pilot free trade zones (FTZs) has been further broadened with the southern island province of Hainan being designated as the latest and largest pilot FTZ, a move to further open the country's market and to attract foreign investment.

China's total imports will likely exceed $2 trillion this year to set a new record, according to an official with the Ministry of Commerce.

China's reform and opening-up has gained momentum in the 40th anniversary of a great revolution that has changed the destiny of the Chinese nation and influenced the world. But some critics still see the speedup as a compromise to external pressure.

"It is unfair to say that," World Bank country director for China Bert Hofman said, adding that China's decision to further reform and open-up is in line with its economic fundamentals and national interests.

"It's only natural to respond to people's call for better lives," he noted.

The great spirit of reform and opening-up has become the most prominent hallmark of the Chinese people in the modern day, and the country has clarified that its door of opening-up will not be closed and will only open even wider.

The ministry will also push for the lifting of market access restrictions on foreign investment in sectors that are not on the negative list to level the playing field for Chinese companies and foreign enterprises.

It is estimated that China's imported goods and services will exceed $30 trillion and $10 trillion respectively in the next 15 years.