A cross-border marathon race between China and Myanmar was held Monday in the city of Ruili, in southwest China Yunnan Province.

The 2018 Ruili China and Muse Myanmar International Marathon has attracted around 9,000 participants from more than ten countries and regions including China, Myanmar, Singapore, and Germany, with the course winding its way across the border with Myanmar and back again. 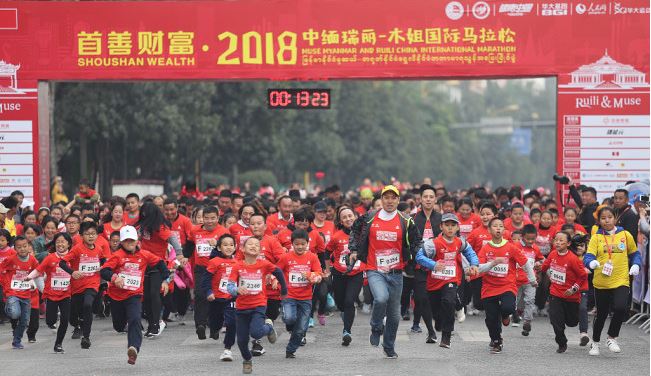 A cross-border marathon race between China and Myanmar is held in the city of Ruili, in southwest China Yunnan Province, December 31, 2018. (Photo: VCG)

"Those who finished the race were awarded a medal inlaid with rosewood. Myanmar runners were presented with the special Paukphaw Friendship Award," it added.

"This is the second time that I have taken part in the cross-border marathon. It's amazing. Chinese people are very friendly and we are warmly welcomed. My hometown and Ruili have a lot in common, such as culture and food. We are just like family," said Than Than Soe, a runner from Myanmar.

Located in west Yunnan's Dehong Dai and Jingpo Autonomous Prefecture, Ruili is a city on the China-Myanmar border. Beginning in Ruili's Jiegao Town, the marathon covered 6.5 kilometers in Muse of Myanmar before recrossing the border back to Ruili.

As held on the last day of 2018, the competition was also regarded as a New Year's Eve carnival for many participants.

This year's marathon is the second edition of the event, which is becoming an important platform for cultural and sporting exchanges between China and Myanmar.