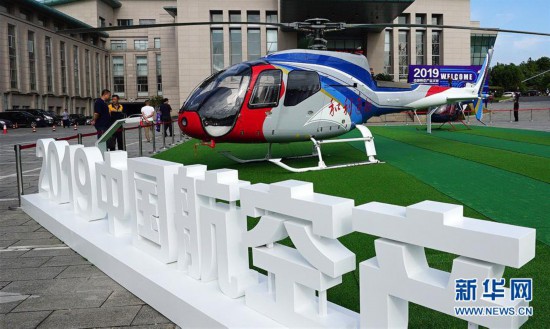 A helicopter sits on a lawn at the 2019 China Aviation Industry Conference in Jingdezhen, Jiangxi Province, on September 5, 2019. (Photos: Xinhua)

A drone is on display at the 2019 China Aviation Industry Conference in Jingdezhen, Jiangxi Province, on September 5, 2019.

Jingdezhen is known as "the Cradle of Chinese Helicopters", taking a pivotal position in the aviation industry. Over the past 50 years, it has made many records in Chinese helicopter history, such as the largest tonnage helicopter in Asia -- ZHI8, the first civil-military general-purpose helicopter in China -- ZHI11, and the first large-scale civil transport helicopter -- AC313. Particularly, the armed helicopter ZHI10 won the first prize of the National Scientific and Technological Progress Award, representing the highest level of the development of China's helicopter industry. Visitors at the 2019 China Aviation Industry Conference in Jingdezhen, Jiangxi Province, on September 5, 2019.

At present, there are three general assembly plants and more than 50 supporting enterprises in Jingdezhen, forming a large-scale industrial cluster with 100 aircraft capacity and 10 billion yuan value. The growth of helicopter sales has increased more than 20 percent for three consecutive years, accounting for more than 60 percent of domestic helicopters. In 2018, the output value of helicopters and the general aviation industry reached 20.85 billion yuan.

Jiangxi is the birthplace of the first aircraft of the People's Republic of China and the only province in China producing both rotorcraft and fixed-wing aircraft. This conference will help both Jiangxi Province and Jingdezhen realize their aviation dream, so as to coordinate the joint development of traditional porcelain culture and the aviation industry.